Why We Must Compliment Each Other

by [email protected] | Jul 27, 2017 | Build each other up, Emily Conrad, encourage others, spiritual gifts, Why We Must Compliment Each Other | 6 comments 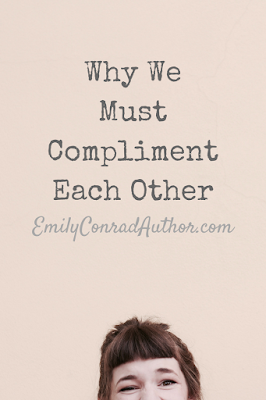 When I answered the phone call, I never expected to be asked to do an interview on the local news. Yet, my friend described that a reporter had taken an interest in the story of her dog being bitten. Because I’d helped get the dog to the vet and also owned a dog that had been attacked twice in the last year, the reporter thought interviewing me would help to fill out his story.

I was hesitant because I am not the hero in the story of helping her dog (spoiler alert: Jesus is) and because it was a TV interview. Don’t cameras add ten pounds? And what if I could think of nothing intelligent to say?

After all, on that phone call, I was a mess of fumbling hesitancy. However, the reporter got on the line and assured me he thought an interview would be a good addition to the story and that the story was for a good cause—awareness of dog bites and how to prevent them.

That alone would not have been enough to convince me. But as I fumbled through that phone call, I heard in my mind encouragement I’ve received over the years. I’ve been told multiple times that I’m well-spoken under pressure.

If not for that encouragement, I would’ve declined. However, through that positive feedback, God had armed me with just enough confidence to agree. I’d been given a talent, and I had a responsibility to not bury it.

In a group at my church, we recently watched a video in which the speaker said some people don’t know what their spiritual gifts are.

That seemed like a shame to me and another woman in our group (and maybe to others as well), so we asked the group to go through the uncomfortable exercise of either saying what our gifts are, or if a person didn’t know their gifts, letting the group help suggest what strengths we’d seen in each other.

It was a bit awkward for some, and I can’t say we did perfectly at being able to discern each person’s gifts, but I hope that in some cases, the discussion encouraged those present.

And I hope that encouragement empowers them to really take advantage of their gifts. To use them.

Or, to go with the Biblical analogy, if we hold back, the body of Christ loses out on a hand or an eye or something else it needs to function at 100%.

People who don’t know they have something special won’t value that aspect of their personalities. They aren’t as likely to feel confident enough to step out and use them when the opportunity falls in their laps. They’re even less likely to go out and find ways to minister using that special gift.

So, for the sake of the story and the sake of the body of Christ, when you see someone do something well, let them know. Encourage them to continue. Remind them that the skill is a gift from God given to help complete the body, the story He’s writing.

And when God gives you the opportunity to step out and do what you do well, don’t hang back. Each gift is a responsibility and an opportunity.

As for my opportunity, I won’t say I rocked the interview, but thankfully, using our gifts isn’t about perfection. Nothing to do with the faith life is about perfection. It’s about a willingness to be used when and how God chooses to do so. We just have to show up, talents surrendered to Christ so He can write the story He wants in our lives, our communities, and our world.