When Effort Fails: A Lesson from a Houseplant

by [email protected] | Apr 13, 2017 | A lesson from a houseplant, Emily Conrad, let go and let God, Life Lessons from a, my weakness His strength, When effort fails | 0 comments 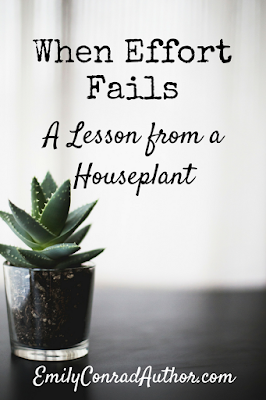 I have a track record of killing houseplants. African violets and cyclamen shriveled up almost as soon as I brought them in the house. I once killed a cactus in spectacular fashion by putting it too close to the hot oven. I kept an anthurium alive and flourishing at work for months, but it died shortly after I brought it home. And when I put our two-feet-across jade plant outside for the summer, the squirrels nibbled it to death. Some of my other victims include an aloe, a dieffenbachia, an umbrella plant, and a Norfolk Island pine.

Changing my habits to try to take better care of my plants proved dangerous, too. I would get too extreme, killing them with too much water or too much sun or… well, if I knew, I wouldn’t have killed so many.
During that time, I learned to help my plants hobble through winter and then put them outside and let nature care for them through summer. That way (unless the squirrels get them), they thrived for at least 3 months of the year, normally rallying enough to survive the winter inside with me.

Then, the weak plants all died off, or maybe I picked up a few plant tending tips that actually work, or maybe statistically, I was bound to collect a couple of all-stars that would cling to life no matter what. Whatever the case, I now have had some plants survive a few years. In fact, I’ve even had to re-pot some because they outgrew their containers. 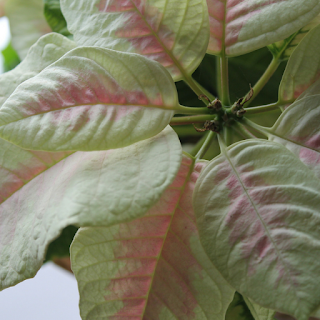 But when I bought my poinsettia plant for Christmas in 2015 (pictured above in its original glory), I didn’t expect that I would keep it much past January. My avid gardener of a father-in-law assured me it was difficult to coax new blooms from them. After he gave up on the plants he’d kept for this purpose, I figured it would never work for me. If following the strict light schedule was too much for him to bother with, I shouldn’t even try, since I can’t even follow a watering schedule well.

Still, after the poinsettia dropped its colored petals, it clung to some green leaves, and I didn’t have the heart to throw it out. For over a year. Despite how pathetic it looked.

Passing through my enclosed front porch a couple of weeks ago, I noticed it was growing tiny new leaves. Unfortunately, those leaves were yellow. Only I could discourage a plant into growing dying leaves.

Then I took a closer look at the new growth.

The leaves were more cream than yellow, and they had pink along their centers, a pattern I hadn’t seen since I first bought the plant two years ago. As I write this, the poinsettia is blooming, growing the cream and pink leaves one petal at a time to form flowers. 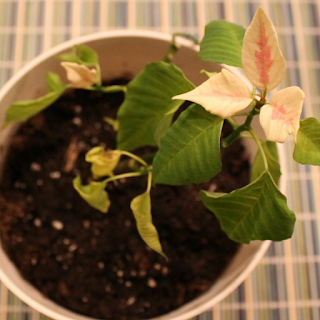 The short periods of daylight during Wisconsin winters must’ve combined with the plant’s out-of-the-way perch on the porch to create the perfect, effortless poinsettia nursery.

This reminds me of how novel writing has been going for me lately. I have one manuscript under contract with a publisher, and two more waiting to be submitted to publishers at some (undetermined) time in the future. But as far as a new manuscript goes, I’ve been at a stand-still. Instead of longer fiction, I’ve worked on a short story and blog posts. I’ve read and critiqued and judged in a contest and just left novel projects alone.

Then, today, something stirred in me and I actually got excited enough about a story idea to talk about it. Out loud, With another person. With passion. This is like watching God breathe new life into a plant that had been dropping leaves, not growing new ones. It’s like noticing the first signs of a fresh bloom. It’s a reminder that it’s not all up to me, and that Christ is strong in my weakness–in plant care and in novel writing and in every area where effort fails.

But he said to me, “My grace is enough for you, for my power is made perfect in weakness.” So then, I will boast most gladly about my weaknesses, so that the power of Christ may reside in me. 2 Corinthians 12:9, NET

What have you been working so hard at? What isn’t going your way, no matter how much you pour into it? You know you’re called to it, but as you work and work, all you seem to do is wear yourself out? Maybe it’s time to set that thing on the porch for a while. Find a sunny spot where it’ll get the care it needs to grow without your constant attention. 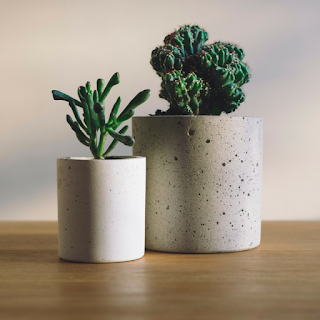 Because sometimes, the unlikely, beautiful things in life require us to quit over watering, quit all the fancy schedules and million-step-to-success plans. Instead, sometimes there’s nothing more helpful we can do than step back.

Sometimes, our efforts only hamper the very thing we’re trying so hard to nurture. Instead of fussing and fretting, perhaps we’d be better off letting the sun rise and set, rise and set while God works in secret. So many things are beyond our natural talent and our learned skills, but all these things are more than possible to God.

When Effort Fails: A lesson in #faith from a houseplant via @emilyrconrad