When All I See is Room for Improvement 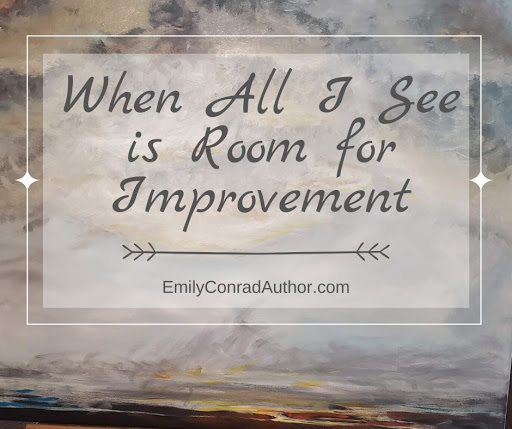 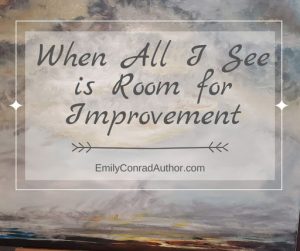 I dabble in painting, so after my mom asked me to create a piece for a rental she’s furnishing, I got out a canvas. She sent me a photo of a painting of a cloudscape, and I tried to mimic it. My painting is similar in some ways, but different in others.

I sent her a photo of the finished product, thinking I was pretty much done. 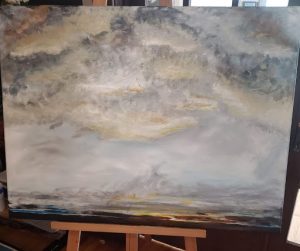 But the more times I looked at my painting, the more I saw opportunities.

If I just brightened this up… or darkened that…

I got the brushes out again, poured more paint, did some touch ups, sent Mom a new picture.

After that, I decided I would quit messing with it. What if I made a change, and she no longer liked it?

But as hours ticked away, the more I saw it, the less I liked it.

When I said as much to my husband, he scoffed and said that’s how I always am.

I do this with my stories, and it’s exhausting. If I’m honest, I do it with myself, too. I focus on areas where there’s room for improvement. I struggle to deem things finished or good.
So, this morning found me back at my canvas, tweaking some more.

I washed out my brush three different times because I kept telling myself the painting was done only to change my mind.

My process brought to mind another Creator. The perfect one, whose work I’m imitating so poorly.

I thought about how He spoke and light was born. How He fashioned heaven and earth, sky, sea, and everything in it, and after each step, declared His work good.

He didn’t go back on day four to tweak the work He’d done on day one. He wasn’t surprised at how moisture, light, and the expanse of sky interacted, and He didn’t have to alter his work after the fact.

Meanwhile, I struggle to paint a cloud. Even as one part of me declares the painting good and finished, another part taps finger against my chin and says, “But you could…”

I don’t have God’s creative abilities. I can’t look at my work and call it good without offering excuses for this or that. I can’t declare it finished, once and for all, and take a day of rest knowing nothing at all is amiss.

I won’t arrive this side of Heaven, either. In me and in my work, there will always be room for improvement.

Yet the Bible says I’m fearfully and wonderfully made, and that I’m here for a purpose, and that I’m not to bury the gifts I’ve been given out of fear. 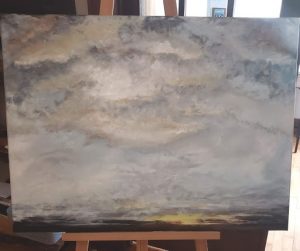 God’s good work didn’t stop at creation. He sent His Son, the Light we need more desperately than the heavenly bodies that provide physical illumination, into the world.

That Son, Jesus, died for the sins of the world. For my sins. To redeem me and all who believe from the fallen state that hounds us in our art and in our lives. Though on my own, I am not good and cannot accomplish perfection in any form—even on a simplistic canvas—through Jesus, I am declared a righteous child of the living God.

His work is good and perfect. Enough so that He can use even my flawed attempts to His glory. Where I lack, grace abounds.

And that truth goes far beyond art.

Not that I have already attained this—that is, I have not already been perfected—but I strive to lay hold of that for which Christ Jesus also laid hold of me. Brothers and sisters, I do not consider myself to have attained this. Instead I am single-minded: Forgetting the things that are behind and reaching out for the things that are ahead, with this goal in mind, I strive toward the prize of the upward call of God in Christ Jesus – Philippians 3:12-14, NET
We pursue excellence in the work He calls us to. No, we won’t be perfect. Despite our best efforts, there will be room for improvement. But we can rest in the assurance that the most important work was perfectly completed on our behalves, given by grace, to be accepted by faith.
We fall short, but grace never does.

As I uploaded the photos of my painting to this post, I smiled. Will you even see the differences between them? And if you do, will they look to you like improvements?
It’s funny how important those adjustments seemed to me, how much of a difference they seemed destined to make. In reality, the end result isn’t that much different from the initial one.
Still, it was an act of faith to take that canvas off my easel. I’ve done so now. I did the work I was called to, and the time has come to let grace move into the room fear previously assigned to improvement.
Forgetting what’s behind, I press on in peace.

Though on my own, I am not good and cannot accomplish #perfection in any form—even on a simplistic canvas—through Jesus, I am declared a righteous child of the living God. @emilyrconrad #hope #encouragement

God’s work is good and perfect. Enough so that He can use even my flawed attempts to His glory. Where I lack, #grace abounds. @emilyrconrad #hope

No, we won’t be perfect. But we can rest in the assurance that the most important work was perfectly completed on our behalves, given by grace, to be accepted by faith. @emilyrconrad #encouragement