What If God Is Better Than We Know?

by emilyconrad@sbcglobal.net | Jun 27, 2017 | Emily Conrad, faith through trials, God is good, What if God is better than we know | 7 comments 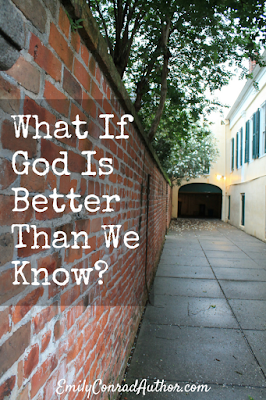 What if God is better than you know, Madeline?

The hero in my work-in-progress asks this question, and I’m thinking about it this morning because of the hard time a friend is experiencing and maybe, too, if I’m honest, because things haven’t been going that well for me, either.

I’m okay. I really am. Except that I’ve noticed the occasional bitter thought pop up in my heart.

I’ve noticed that sometimes the darkness convinces us that God is less than we believers have made Him out to be.

Though initially grounded in belief in His goodness and love, we drift into thinking of Him as the distant father with the long list of expectations, and topping that list is blind faith that must never be shaken by severe blows. We fall prey to assuming He’s a disconnected god who allows evil in our lives in spite, because say, we asked for stronger faith.

Or, for example, never write a blog post about the fragrance that comes from being pressed because the same day it goes live, your dog will be attacked for the second time in ten months and you will call your sister in tears for help taking your injured dog to the vet, and you will have to look into your dog’s scared eyes as they staple the wound, and then, if that weren’t enough, you will spend your walks, which used to be peaceful and fun, scanning yards, wondering from which direction the next attack will come.

Isn’t this the kind of pressing I just wrote about? So, I invited this. I should’ve written about something else. How to have faith in times of joy, for example, so God could test me on that instead. 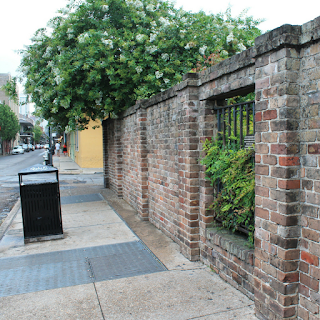 In this way, we make God out to be a being we can manipulate. We also make Him out to be one who looks at our faith with skeptical detachment, one who gets pleasure from our suffering, from showing us just how far we have to go, just how little our faith is, just how powerless and insignificant and frail we are.

And we just know that when we crawl, panting and bloodied, out the other side of the trial, we’ll be handed a hard little lesson learned. A rock instead of the loaf of bread we asked for.

But this is exactly what Jesus said in Matthew 7:9-11 God wouldn’t do to us. And so, the line from the story reverberates in my mind this morning. For myself. For my hurting friend. And maybe for you, too. 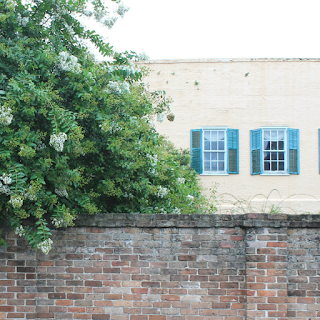 What if, instead of deciding to test my faith because I dared to write about the good that comes from pressing situations, He prompted me in advance to write that post to prepare me for the coming attack?

What if He did even more than this? What if He also prompted my husband to agree for both of us to do VBS skits about ten months in advance so that on the very day our dog is attacked, we would be performing a skit in front of about 100 witnesses. And in that skit, my lines would have me tell my husband, whose character survived a jousting tournament without a scratch only to fall victim to a nasty fall afterward, that he needed to thank God for protection that had kept him from worse injuries.

And so, I thank God that my dog’s wounds weren’t worse. That this time is nowhere near as severe as last time. That she is healing beautifully. That He took steps to bolster my faith at just the right time. He literally scripted praise at a time when I failed to think of it myself. 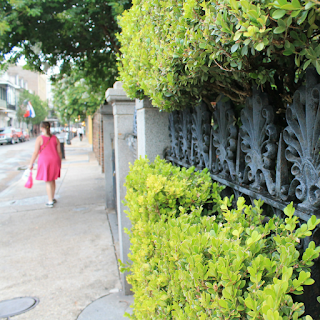 What if He is taking better care of us than we would ever dare to hope?

What if, on those days when we don’t know how we’re going to make it through, He has a plan for our rescue which He put into motion before time began (Ephesians 1:4-5)? And not only is this plan for our ultimate rescue, but He has also provided sustenance for us in the meantime. He has provided us for every. thing. we need. All the riches of the heavenly realms are ours in Christ (Ephesians 1:3). Even now. Even in this.

We haven’t been given a useless rock for nourishment. We’ve been given living water and the bread of life. And when we come out on the other side, we won’t be panting or bloody. We’ll be restored and healed.

What if God is better than we know? He is. Oh, how He is. #Godisgood via @emilyrconrad