What I Learned by Looking Back

by emilyconrad@sbcglobal.net | Apr 13, 2018 | Emily Conrad, The Writing Life, What I Learned by Looking Back | 14 comments 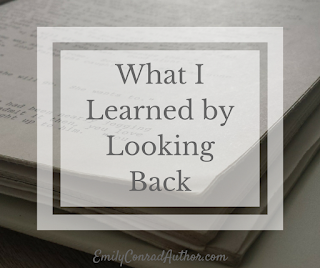 Stomach tense with nervous energy, I descended the stairs from my writing desk on the second floor of our house down into the basement. I edged around the Christmas tree we left set up to get into the old coal room, which we use for storage.

I slid the box with my wedding dress off another large box of memorabilia from my childhood, reached in, and pulled out a large binder labelled “High School.”

I remember high school as a time of struggling with friendships and fitting in. I remember myself as awkward and totally not in control of my own hair (hello, frizz).

And this binder, well, that was bound to contain a pure reflection of just how awkward and young I was. 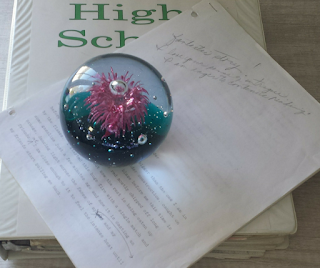 The binder is packed with short stories I wrote between 1997 and 2001.

Most writers have a manuscript languishing in a drawer or a box or a hard drive. They vow it’ll never see the light of day. I have some early novel manuscripts that I have no intentions of ever trying to publish again (I did try to get at least one of them published back then), but those were written after these short stories, making these stories more likely to be cringe-worthy than any other old fiction I’ve tucked away.

But, I wanted a story about a knight and a lady. I only needed a few good sentences so a character in a current story of mine could read them off. And yes, I dabbled in stories about knights and ladies a couple of times in high school. Why reinvent the wheel?

As soon as I cracked open the cover of the binder, I saw why: this was bound to be embarrassing. The covers I’d drawn back in high school were pretty cheesy. Tense, I flipped through the stories and read a snatch here and there.

And then I started to smile. Excitement replaced the nerves. I’d been unfair to my high school self. 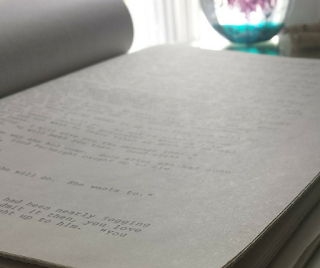 Whatever else may or may not have been going on, there is a still-recognizable reason my friends passed around my stories, reading intently. Looking back as an adult and a published writer, I was actually impressed. I found myself surprised by dialogue or twists I’d long since forgotten writing. Man, was I brave, writing scenarios then that I’d shy away from now, too well aware of details I don’t know, too bound by reality to let imagination fill in so much. I found a note from a teacher who wrote, “Fantastic story! I love your sense of intrigue!”

Was some of it goofy? Yes. Was some of it eye-roll-inducing? Eh, yeah. Did I use passive voice and totally skip some moments of interest? Yes and yes.

But in those pages I saw not everything has changed about my way of storytelling. I love to hint at secrets and reveal them slowly. I tend to gravitate toward focusing on heroes over heroines. I still favor some of the same character traits. 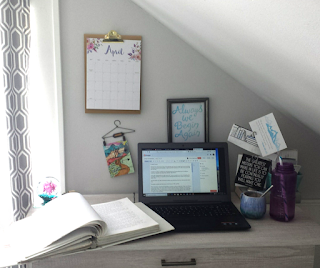 I’ve learned a lot by looking back.

We shouldn’t be afraid to be a beginner at something. A beginner’s enthusiasm and authenticity go a long way. Let’s attack our passions without self-consciousness. Let’s just go for it in bravery, love the process, enjoy the steps along the way, and take it one stage at a time. We won’t get it all right, but when we pursue God-given passions wholeheartedly, maybe we’ll get more right than we realize at the time.

We shouldn’t be afraid to encourage beginners. When I saw that note from my old teacher, I had no memory of it. I don’t know which year I wrote the story, or which teacher issued the praise. But I do know they ignited excitement in my young writer’s heart. I know they made me surer of my calling. I probably went home and dove into writing more, bit by bit developing that sense of intrigue and that passion for story. Would I be a writer now, if not for that teacher? Probably. But you never know. Harsh criticism that early on may have stopped me in my tracks. Experiences early on can have far reaching effects.

We should look back on ourselves with grace. We were not who we are today, but we were on our way. God was molding us then into who we are now, and He’s molding us still into who we’ll be tomorrow and into eternity. There’s nothing wrong with growth. In fact, it’s a good thing, right?

Let’s just go for it in bravery, love the process, enjoy the steps along the way, and take it one stage at a time. @emilyrconrad #amwriting #courage #newbeginnings