The Seeds that Grow in this Field of Life

by emilyconrad@sbcglobal.net | May 11, 2017 | Emily Conrad, growth, looking on the bright side, persevering through hard times, The seeds that grow in this field of life | 2 comments 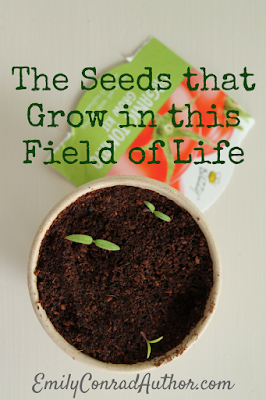 I’ve not made a secret of the fact that life has thrown a lot at me and those I care about lately, but here’s something you don’t know that I think you should:

I found the kit in the dollar section of the store. It was just a light cardboard box a couple inches across, promising to contain what I needed to start my very own, grown-from-seed organic tomatoes.

I forget if it was one dollar or three, but whatever the case, I made the investment and tore open the box shortly after getting home.
I soaked the little dirt disk and watched it expand. I plunked it in the bio-degradable pot. With my index finger, I poked the tiny seeds into the dirt, and I set the whole thing on my desk in the sunniest room in the house since it’s Wisconsin, after all, and we’re still not past danger of frost.

At one point, I worried I had let the seeds get too dry, but I sprinkled on a few more drops of moisture every time I thought of it and the planting compound felt dusty.

One day, I saw no growth. The next, a little seedling was spreading two tiny leaves this way and that, green and proud. 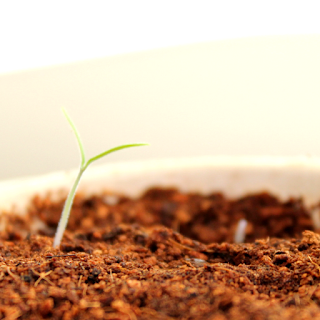 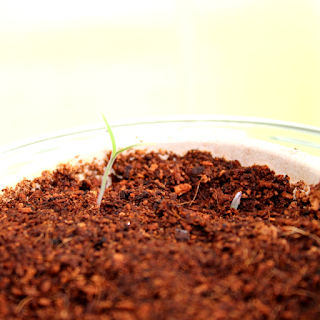 A day or two later, I saw a little white arch sticking out of the dirt in another spot. Another seedling was lifting its head. And then another.

You can hardly see them in the photos. I know. But the fact that I’m including them anyone tells you how excited I am about them, doesn’t it?

And anyway, living a photographic life? Not all that it’s cracked up to be.

Give me my fuzzy, half-inch tall tomatoes and I’ll love them, photos or no.

Sometimes, I walk out onto the porch just to check on them. To see if any others are braving the air and the sun.

You see, growing one tomato plant, let alone three and counting, is novel for me because in my old yard, the one we moved out of last spring, vegetables wouldn’t grow due to what the gigantic black walnut tree did to the soil. But this house doesn’t have that challenge, and I’ve been thrilled at how easily vegetables grow here.

Lately, life has been one thing after another. Writing struggles. A sick dog. The diagnosis of a family member. A death in my church family.

But even in times like this, something is growing and promising fruit.

And I don’t only mean my tomatoes. 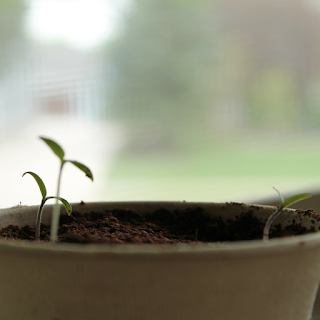 I went over a year without writing a new novel manuscript. Inspiration had dried up. And then, just a week or two ago, words sprang up through the soil. Now I’m more than 10,000 words into a new story.

About a rock star because, really, why not? The story’s growing, this rock star has more depth than I thought he would, and I’m celebrating it.

Friendships? Yes, some of those are growing, too, watered with tears I wouldn’t have openly shed if I weren’t in this particular field of life.

I think there’s something to be said for recognizing that a lot in life might not grow this or that right now, but this other thing is begging to be poked into the soil, watered, nurtured with a sunny spot.

I think there’s something to be said for celebrating the things we can cultivate while other fields lie fallow.

And, dear friend, there is so much to cultivate. Even here. Even now.

Dear friend, there is so much to cultivate. Even here. Even now – via @emilyrconrad #hope