The Post About Weakness I Didn’t Intend to Write

by emilyconrad@sbcglobal.net | Jan 24, 2017 | Emily Conrad, In our weakness He is strong, Inspiration, overcoming writer's block, strength in weakness, The Post About Weakness I Didn't Intend to Write, The Writing Life | 4 comments 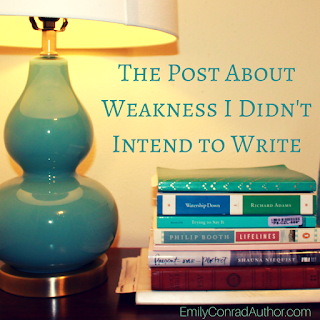 I’m writing to you from Saturday morning. I quit what I was doing as this post began to play in my mind. This is a breakthrough, as writing posts lately has been a struggle.

The problem with writing started a few weeks ago. I attempted to right it. I explored my relationship with Christ in new ways. I prayed. I tried brainstorming. I asked friends for feedback and ideas.

Eventually, I decided this was a time of spiritual growing and stretching that would leave me uncomfortable until the work God was doing in my heart was complete. And so, I tried to continue, valuing discipline and showing up, even though I didn’t make much progress.

Then I took a personality test on Friday. Of all things, that prompted a breakthrough.
It spoke about two of my weaknesses. I know I have these particular weak spots, yet somehow they sneak up on me more often than I care to admit.

First, I hear criticism loudly. Second, because I detest failure and imperfection, I tend to burn myself out in my pursuit of perfection.

To see these aspects of my personality spelled out so clearly on a screen in the results of the personality test was liberating. Not everyone has the same weaknesses as me, which means others think about life differently than I do. And if they can, I can, too.

I don’t have the power to overcome my weaknesses in myself, but I certainly have it in Christ.

If He is for me, who can be against me? I needn’t care so much what others think. Not everyone does. I also needn’t so doggedly pursue perfection. Actually, burning myself out feeds into the failure I want so desperately to avoid. God built rest into even the law by naming a Sabbath and in other ways, as well. How much more so is rest intended for followers of Jesus, who live not under the law but under grace? We’re meant to drop our heavy burdens for his light yoke. 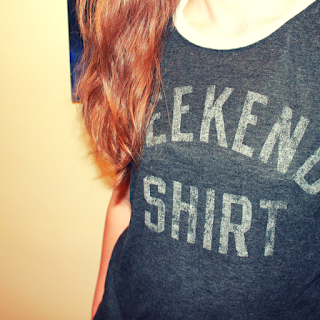 With fresh awareness that posts (and other writing) were coming only by struggle because I had allowed both of these–sensitivity and perfectionism–to take the reigns, I entered my Saturday with determination that today would not be a normal day of work for me.

Instead, I put on a T-shirt labelled WEEKEND SHIRT (yes, in all caps), took a pile of 8 books (one notebook, one journal, and one planner in the pile) and settled in with an extra-large latte made from my favorite save-it-for-Saturdays-to-make-it-last coffee. I began to read.

I only made it through chunks of three of the books before feeling so full of inspiration I got up to work on other things (soup and dishes) so I could take a mental break to think about what I’d read. But something had broken through in just a couple of chapters of reading, in one morning spent not trying to create but trying to absorb. 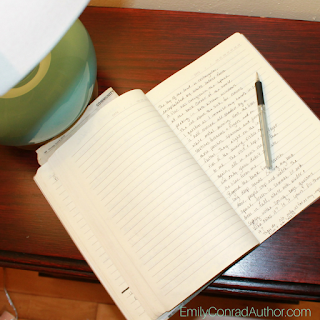 I had to bring my notebook to the kitchen to scrawl a poem. I had to leave the kitchen for the laptop to write this to you, to say that if you’re also feeling burned out, if you’re also unsure of where inspiration has gone, or when things got so hard, perhaps it’s time to recognize your weaknesses anew.

Though your weaknesses are likely different than mine, all weaknesses have commonalities.

Where we are weak, praise God, Jesus is strong. With God’s help, we can acknowledge and actively attack those weaknesses by practicing something new.

I didn’t specifically take the personality test or make such an effort with my Saturday in a prayerful way. It’s now, as I type that I recognize taking the the test and this morning were answers to my ongoing petitions for breakthrough, for peace, for inspiration and the words God would have me write.

In my weakness, I searched for Him, and He answered when I wasn’t looking for it. He filled my weakness with His strength.

He wants to do the same for you, providing rest for the perfectionist, assurance for the insecure, stillness for the busy, solitude for the crowded, love for the rejected. 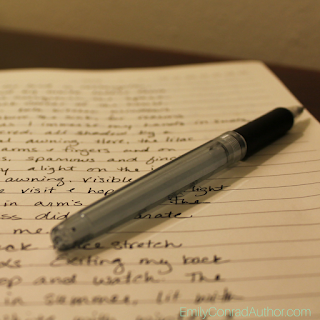 The funny thing is, when I sat down to type a post, I didn’t mean to write about the personality test or the struggle writing has been or my weaknesses. I meant to share with you the poem I wrote. But, since we’ve come this far, I’ll save the poem for another day, proof that when we take the invitation to let Christ be strong in our weaknesses, He answers us richly.

Where you are weak, praise God, #Jesus is strong. #strengthinweakness via @emilyrconrad