The Dream that Used to Seem Impossible 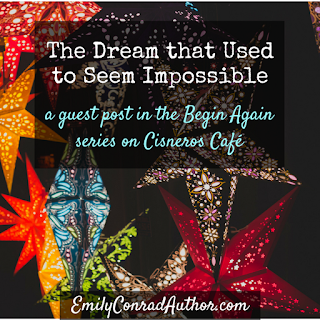 I’m married to my high school boyfriend, the only man I ever dated. I went to college in my hometown. Even now, at age 33, I live half a mile from my childhood home.

I’m either content with my lot in life, or I’m the queen of avoiding change. So the important part of my new beginning isn’t what happened after I started over, but rather how God turned me from the natural course of my life to the wholehearted pursuit of a dream He gave me long ago.

That dream was writing. I fell in love with crafting stories as a child, and I went to college expecting to never use my degree. My plan was to work part-time and spend the majority of my energy on penning novels.

When I first veered from that plan, it was out of necessity. Having married young, I needed to put my husband through school. In 2005, true to my change-resistant ways, I applied for a full-time position at the company where I already worked part-time.

A couple of years later, my husband finished his degree and began his career. Though I sometimes fantasized about quitting to write more, the hours had become habit, and the income made life easier. I kept my day job.

I was comfortable until God jolted me out of my routine, starting in 2012 with a broken wrist.

To find out what events that set in motion, follow me over to my post in the Begin Again series on Cisneros Café! I’m so excited to be a part of this beautiful series. While you’re over there, be sure to check out the other posts.

P.S. This replaces my normal Tuesday post, so I’ll see you all on Thursday. Praying that God meets you this week with renewal and new beginnings only possible by His supernatural power.