The Dog and the Treadmill: A story about protecting priorities

by emilyconrad@sbcglobal.net | Jan 12, 2017 | Emily Conrad, lessons from the dog, Life Lessons from a, protecting priorities, The Dog and the Treadmill, The Writing Life, time management | 4 comments 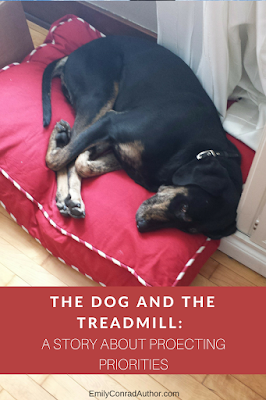 I am working on a short story to share as part of the series on God’s love, which will be taking over this blog next month. I needed to get the first draft done as soon as possible to allow for critiques and revisions, so I’ve been working on it since December 30th.

But as I wrote toward the goal of finishing the story draft, my dog Luther was striving toward his own set of goals, which work at cross-purposes with mine.

In order to accomplish my goals, I needed to do something to distract Luther from his.

So, I procured a used treadmill. He was afraid of it at first, but I made being on it worth his while with a constantly-loaded spoon of peanut butter in licking range. (Yes, dog-safe peanut butter–not all of them are.)

Luther will now run on the treadmill without the extra incentive, but the treadmill is not Luther’s priority, so he doesn’t stick with it more than ten minutes most mornings. Then, he’ll go lay down, tired and calm. Later in the day, I may or may not ask him to try again, and he’ll go another five to ten minutes.

Luther is a hound, and as I’ve written before, my vet once told me “hounds are bred to wear things out.” Fifteen minutes of exercise should not be enough to wear him out. But when I space out a few mini workouts throughout his day, his behavior is much more manageable both on walks and around the house. 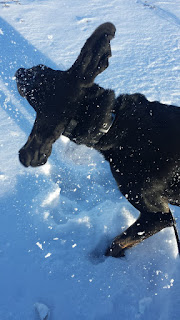 This is good and bad news for the rest of us who have priorities.

As I worked toward finishing the draft of my story, I was pretty good at blocking out the large distractions. I put off taking on other writing projects that I knew would consume a few days of my time in a row. With this prioritizing, I had big chunks of time to work that should’ve added up quickly. That’s good news.

The bad new is, I wasn’t as good at guarding the smaller blocks of time. Five minutes for Facebook here, ten minutes for email there. I’d finish and was free to go back to my story, but then I’d find my interest in it even more diminished than it was before I’d wandered off to do something else.

I had used little increments to wear out my dog, and then I went and did the same thing to myself.

Those small distractions aren’t as harmless as they seem. It takes longer to focus after coming back from a few minutes spent thinking about something else, leaving us worse off than we were before. Plus, all that time away adds up.

It’s time to get off the distraction treadmill. To say no to constant email checking. To close social media tabs if we must. To silence phones. To recognize that we have greater priorities and to stick with them long enough to think through the obstacles we’ll undoubtedly encounter when doing anything worthwhile.

And, if we must, to put our distractions on treadmills of their own. 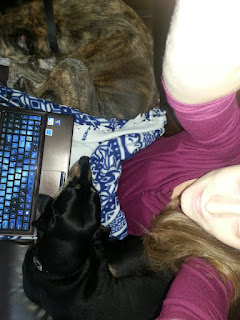 What steps do you take to protect your focus on your priorities?

The Dog and the Treadmill: A story about protecting #priorities via @emilyrconrad