Selling yourself in pitches and interviews 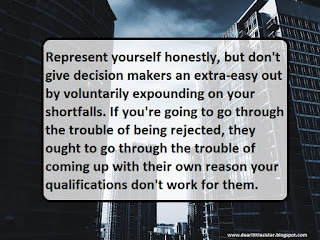 One of my writing friends met an editor at a conference this weekend. I was there as they discussed her manuscript and was thrilled for her when he asked to meet to discuss her writing further. As she prepared to meet with him, she was concerned that he wouldn’t like one particular aspect of what she’d written in her novel. She didn’t quite put it this way, but she seemed to be ready to talk him out of looking at her writing based on what she expected his response to be.

The thing is, I’d been there when this particular aspect of her writing had been discussed, and I felt she’d already represented it honestly. For the editor to know more about it (including if it would work for his publishing house or not), he would have to read the novel. So, I borrowed some advice I’d heard once and told her to not reject herself for him. If he is going to say no, let him work to be the one who comes up with a reason why her novel doesn’t fit the needs of his company.

If you’re in a situation like this, I urge you to do the same. You may not be a writer, but I’ll bet you interview for jobs from time to time. Be honest about your qualifications, but once the potential employer is aware, don’t put undue stress on an area where you think you might be unqualified.

For example, when I once interviewed for a position that would’ve been a promotion, the company declined me saying that I didn’t have enough experience running a department the size of theirs. I think they mentioned budgets, in particular, as something where my work experience was lacking. Did I bring that up when I interviewed with the next company? No way!

Granted, the company I interviewed with next was hiring a manager for a department smaller than the previous one, but my experience was with still smaller budgets and levels of responsibility than those that went along with the position for which I was interviewing. I could’ve discredited myself by stressing the fact that I’d never held a position quite like theirs. But I had already been honest about my experience. (And this is important: I am not saying you should be dishonest or misrepresent yourself!) From there, they’d have to decide on their own if I was qualified because I wasn’t going to talk down my skills.

I got the job. It was a step up for me, and that meant responsibility I hadn’t had before, as I (and my new employer) knew it would. But I succeeded at the job, and I think my employer would agree, based on the positive review I received after working there for a year.

I mentioned writing and interviewing applications. Can you think of other situations where this applies?