Pick a Door, but not just any door

by emilyconrad@sbcglobal.net | Aug 30, 2018 | decision making, Emily Conrad, how to decide, Pick a door but not just any door, trust | 16 comments 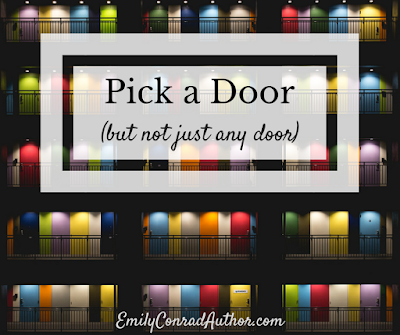 I’m in prison. I’ve been beaten. I devote my time in my cell to God. I pray and sing through the pain of my injuries and through the injustices.

Suddenly, the whole place shakes, an act of God. The earthquake opens all the cell doors and breaks everything that holds me back.

I run out the open door . . . and I miss the mission for which I was freed. 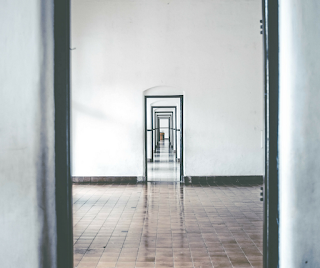 You may have guessed by this point that I’m back in the same passage I wrote about last week, Acts 16. Paul and Silas have been beaten and imprisoned in Philippi. They pray and sing to God. And then, an earthquake opens the doors and loosens their bonds. They’re free to go.

But, amazingly, they don’t.

Their decision saves the jailer from suicide.

Not only that, but he and his entire family find eternal life in Christ.

Paul and Silas spend the rest of the night with him, because they’re still there in the morning, when the magistrates send word to let Paul and Silas go.

Once again, they have another open door. They are free to leave.

Once again, they refuse it until the magistrates come and apologize to them. With these officials as their escort, they finally leave the prison.

Though I can clearly see the importance of the first refusal to leave (the eternal destiny of the jailer and his family), I’m not sure why they chose to wait for an apology before leaving at the second opportunity. Perhaps they set a precedence with the magistrates that would make them slower to persecute the church in the future? Just a guess.

Whatever the reason, the text doesn’t seem to condemn the decision, and by this point, Paul and Silas have shown a dedication to doing things God’s way. We can learn a lot from their example.

In this case, they set an example of not walking through every open door available to them.

Having an open door doesn’t necessarily mean we should go through it.

I’ve made the mistake of walking through open doors I suspect now that I shouldn’t have. In the cases I’m thinking of, I felt stuck, and then a door opened. I saw some shadows in the room the open door led to, but those shadows didn’t look as dark and foreboding as the cell I’d been stuck in. Uneasy, I debated and prayed and eventually decided to take the open door because I didn’t know if another would open in the future.

Did you catch the fear there? The lack of trust?

Sure, I had other reasons for my decisions, too, but in at least one case I can think of, I knew fear was driving me. I think I even voiced my concern that this was the case, but in the end, I satisfied myself with my reasoning to pass through the open door. 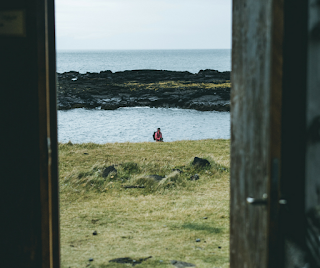 When it comes to deciding which open doors to walk through, reason must not outweigh our trust in Jesus.

Sometimes, what He asks of us defies reason. Sometimes, we’re to stay in a prison cell.

Sometimes, we’re to decline our first and maybe even our second opportunity to flee a trial or end a time of waiting. (Anyone else thinking of Hagar right now?)

Praise God, He is merciful. He is the redeemer, and He will fulfill His purpose for my life, despite my poor choices. He doesn’t give up on His children. He pursues us through the doors we’ve chosen. He is in ultimate control of the outcomes. He knows the way out of every labyrinth, and the first step involves leading us to the one open door we should always take. 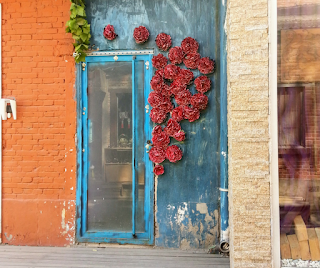 This door might be narrow, but it is open to us, and we should always pass through it.

This door involves humility, repentance, and trust, and it leads to a room of renewal and restoration.

This may mean resisting a different door we’ve longed to pass through, but I’d rather wait in a trial with Jesus than make a decision to keep company with fear and distrust.

Then, when Jesus opens a door and invites me through, I can proceed in His time and His way, as Paul and Silas did.

P.S. Posts will appear here more often during the month of September. In celebration of the paperback release of Justice (hooray!!!), I’ve invited a series of readers and fellow writers to share their thoughts on some of the themes and ideas from the novel. These aren’t book reports! They’re heartfelt and beautiful, personal testimonies of growing closer to a personal God.

Having an open door doesn’t mean we should go through it. Pick a door, but not just any door via @emilyrconrad #trustGod #decisionmaking