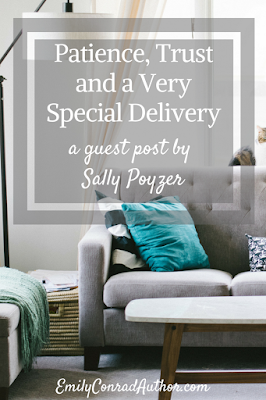 Today is a very special day.

It’s a day I’ve been looking forward to for three years. It’s taken many prayers, much hoping and a lot of patience, but today my dream has finally been realized.

This morning, at 9:35 am, my precious package was delivered.

Right here in my lounge room.

My much longed for…new couch.

Okay, so it’s not as exciting as the delivery of a baby or anything, but I’ve been wanting this couch for a long time. 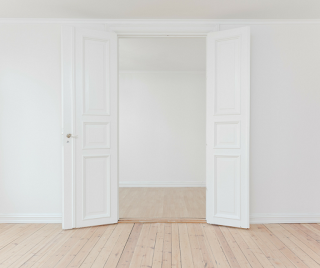 Back in September 2014 we moved into our new home with our two young kids. It was a big step up from our old house, which only had one living area. This meant that when we had visitors over for supper the adults would all get stuck sitting around a dining table while the kids watched a movie in the lounge room. One of things I loved about our new house was that it had a second living area, which we quickly called the ‘playroom’.

The playroom in our new house was small, but it was big enough for a handful of kids to watch a movie. We had a little TV and an old cabinet that we put in the playroom, but we had no couch for the kids to sit on.

So I began to look. I looked in all the catalogues and found some cheap, brand new couches for under $500. Sure, they were probably uncomfortable, but they looked modern. I hovered the brochures under my husband’s nose but his eyes barely registered. Fine. It was probably too much money to spend. I got that. We’d just put all our money into this new house.

Then I went hunting online. There were some good second hand couches for a couple hundred bucks. I waved those at him too and just got “Hmms” in reply. Fine. Still too much money. Fair enough.

Then I found some free second-hand couches online. They were old but they were free. FREE! He couldn’t resist those, surely? This time I got a reaction when I showed him one. “Why on earth would we want that?” he asked with a look of disgust.

“So the kids have something to sit on when we have people over!” I explained, shaking my head that an explanation was even needed.

“They’re little kids,” he shrugged, “they can just sit on the floor.”

That one took a lot of deep breaths. Actually, I probably didn’t take deep breaths. From memory I went on and on trying to explain how important it was to have a couch so that it could actually be a proper second living area.

But he didn’t seem to be listening.

From then on, I gave up showing him couches and instead just dropped hints into our conversation.

Husband: “What would you like for your birthday?”
Me: “Well, a couch for the playroom would be awesome but if we can’t afford that…”

Husband: “When we get our tax return, I’m thinking we should pay it off the house.”
Me: “Or we could buy a couch…”

Husband: “I’m thinking we could use the money from the sale of the cot and change table for a bike for one of the kids.”
Me: “We could. But they’ll outgrow a bike. What about a couch instead?”

Some of you may be thinking: for goodness sake, why didn’t you just go and buy a couch if you wanted one so badly?

I work. Only 10 hours a week, but still, I’m contributing to the family income. When we got married, what’s mine became his and vice versa. I have every right to go and buy what I want, as long as it’s reasonable.

I could have done that. My husband wasn’t stopping me. He just wasn’t supporting me.

However, for a long time now God has been challenging me about the kind of wife I am. I could have just gone and got the couch, but that’s not the kind of marriage I want, where I just go and do what I want without considering my husband’s wants and feelings. I want to be the kind of wife who respects her husband’s opinion and tries to please him too, not just herself. And besides, I’ve done it before, this ‘buying-of-things-my-husband-does-not-support’. I usually regret it.

In the end, God really convicted me. About a year ago I realized that I was nagging. God has taught me about the futility of nagging many times, but I still keep falling back into it. I can be like a petulant child when I don’t get my own way; when my husband doesn’t instantly agree with what I think I need RIGHT NOW.

But it wasn’t just that I was nagging or that I wasn’t respecting my husband’s opinion. God also showed me that I was being incredibly ungrateful.

So many people don’t have a second living area or even a house. Lots of women don’t have kids to accommodate or a husband to say “No”. Or friends to entertain.

I am so, so blessed. And here I was complaining about something stupid like not having a second couch for my second living area.

Finally, God reminded me that I needed to trust in Him. In the Bible, Sarah and Abraham were promised a son and when a son didn’t arrive for a really, really long time (they waited decades!) they decided to go ahead and get a ‘substitute’ son through Sarah’s servant Hagar. That went very badly. Instead, they should have been patient and trusted that God could deliver at the right time.

I needed to do the same.

When my attitude changed from one of complaining to one of trusting in God and being grateful for what I already had, I found peace. Gratefulness. Joy.

I stopped nagging. Stopped dropping hints. Any time that a couch would have been handy in that playroom I used it as a reminder to thank God for what I already had.

Not long after my change of heart my husband showed me a couch in a furniture catalogue. My hope rose. “What do you think of this?” he asked. It was charcoal (my favourite colour for a couch) and modern, but it was also a large L shape.

“That’s way too big, there’s no way that will fit in the playroom,” I said disappointedly, hope plummeting. Had he not been listening at all?

If I’d rushed ahead and got some worn old couch for the playroom then there would have been no need to get a new couch for our lounge room. I would have just had two really old couches for a really long time. I would have been like Sarah, who’d settled for a substitute, instead of waiting for the best which God had promised her.

I had just needed to learn a bit of patience and trust. 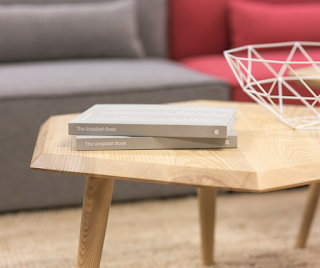 We didn’t go and buy a new couch straight away, but waiting was now a whole lot easier.

Occasionally my husband would show me a picture of a couch he liked and occasionally I’d show him one, but other than that I said nothing.

Then earlier this year he mentioned that perhaps we should look at the furniture sales in the middle of the year, but the sales came and went and there was no mention of couch shopping. That was okay. I was happy to wait until we could afford it. I have so much already.

Then on Monday this week my husband suggested we go couch shopping on Tuesday, his day off. I was enthusiastic but cautious. I didn’t want to get my hopes up. There was a good chance we would end up not going, or if we did, that we wouldn’t find anything in our budget. I worked hard to keep my heart grateful. It didn’t matter if we didn’t get a couch straight away. I did pray, however, that if we did get a couch, it would be the right one.

The next day I said nothing, not wanting to nag, but at around 10:30 am my husband said, “Well, we’d better get going if we’re going to get a new couch!” Party on the inside!

Nothing was suitable or in our budget at the first four furniture shops. Then at the fifth shop we found it. It was perfect. A little over budget but better than we’d imagined. And the sales person said it could be delivered in a couple of days. My husband handed over our bank card.

We went home and moved our old couch in the playroom. After three years the kids have something comfortable to sit on. Yay!

And this morning, to my great excitement, my new couch was delivered. It suits our lounge room perfectly. It’s so comfortable and we all love it.

It might only be a couch. But every time I see it, it will remind me of four things:

Don’t nag,
be grateful,
be patient
and
TRUST GOD.

He will deliver at just the right time!

Is there anything you’ve been nagging your husband for?

Is there something you need to patiently trust God for?

Sally Poyzer is a credentialed pastor with CRC Churches International and has spent many years ministering to women, particularly in the area of marriage. She is passionate about sharing how God can help wives enjoy being married.

Sally was married at nineteen to Josh Poyzer, who is now the Senior Pastor of Portlife Church. They have been married over nineteen years and live with their two gorgeous children, Promise and Rockford, in Adelaide, South Australia.

Her first book, That Book for Wives, is Biblically-based, easy to read and full of practical advice for wives of all ages. It can be purchased from Amazon and iBooks. If you sign up to her mailing list on her website, www.sallypoyzer.com, you will receive the first 20 pages for free. You can also connect with Sally on Twitter and Facebook.

Don’t nag, be #grateful, be patient and #trust God – even when you don’t get your way via @SallyPoyzer @emilyrconrad