One Piece at a Time, coming to terms with succeeding the slow way 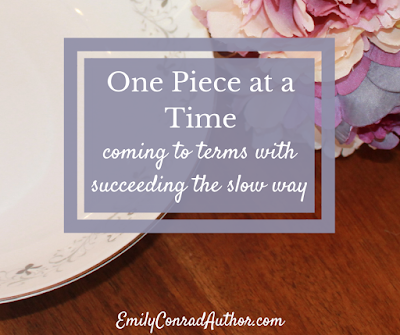 Long before I was born, a woman named Lillian purchased one item of china each week from the local store. In this slow and steady manner, she collected not just one but two sets of china, each to accommodate twelve people. She gave one set to each of her daughters.
My aunt still uses hers when she hosts the family for Christmas. My mom wasn’t using hers, so she gave it to me.

The china came to me in a cardboard box, wrapped in paper that had aged to the color of organic eggshells. I unwrapped piece after piece, surprised at the variety. Why in the world are there two sets of small bowls, one slightly larger than the other? I’m going to have to do some research.

Whatever the case, I’ve already unwrapped and washed a lot of dishes. They’re stacked neatly in the china cabinet I got to store vases and other similar, pretty-but-not-often-used items. 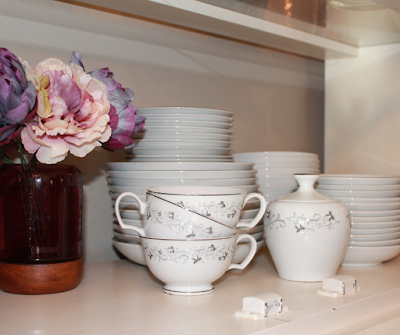 I’ve decided not to save the china for special occasions. The day I unpacked the china, I served myself a slice of cake and a cup of tea, all in the dishes my grandmother collected about fifty years ago. As far as I’m aware, that was the very first time they’d been used.

Later, I did something my grandma had no way of predicting one of her granddaughters would do, even if Grandma did expect that the dishes would survive this long and be passed down. I took a picture of one of the teacups and posted it to social media.

Not only did she not have the internet didn’t when she did the faithful work of collecting one plate, bowl, or saucer each week, photographs were also more of an occasion than they are now.

As I thought about the angle and the caption to use for my post, I realized the patient work my grandmother did so long ago is an excellent example for me today.

I’m much more used to instant gratification than she was. In direct contrast to my grandmother’s steady work of saving up a china set, I placed an order on Black Friday for a full modern dinnerware set.

Within a week or two, three boxes arrived, and just like that, the set was complete.

Unfortunately, this quick-success mindset carries much further into my life than the dining table.

It’s no secret that I’ve been in quite a struggle to write my latest manuscript, in large part because it’s taking me longer than I anticipated. I’d expected to “order” the story, sit down and write it, finish, and move on to the next thing.

But, the style is different than what I normally write, and the learning curve has slowed me down. Much to my dismay.

The night I unpacked grandma’s china, I sipped tea from Moon Mist patterned china and scribbled plot points on sticky notes and stuck them to a board, a desperate attempt to straighten everything out in my mind so I could fix what I’d written and hopefully, finally move forward.

When I photographed the teacup and saucer, I decided to put my storyboard in the background, since I used both at the same time. And it hit me that I’m playing a long game with this story. I’m saving up one plot point at a time and amassing them in a story and on a board in hopes that somehow, someday, God will use it.

This task I’ve taken on in faith is not an overnight process. It’s an investment for the future. It involves sacrifice and time.

This task I’ve taken on in faith is not an overnight process. It’s an investment for the future. It involves sacrifice and time. – via @emilyrconrad #encouragement #Heisstrong

Similarly, I don’t know what journey you’re on. You might be saving up days with your young children, corralling, refereeing, teaching. You might be adding one day after another behind an office desk. You could be planning a garden, teaching Sunday school, investing in friendships. You have dreams, but the work is long and slow. None of us truly know the larger picture God has for our lives.

But, I do know that God is faithful. I know that He calls His children to faithfully follow Him through tasks that sometimes seem hard or even impossible. He calls them on journeys that are often longer or more challenging than they expected. I know that in our weakness, He is strong, and He will fulfill His purposes.

So, as I struggle with this story, I believe God is telling me to relax and stay the course. To enjoy the journey and to stop expecting success to arrive via overnight delivery.

I believe God is telling me to relax and stay the course. To enjoy the journey and to stop expecting #success to arrive via overnight delivery. – @emilyrconrad #hope 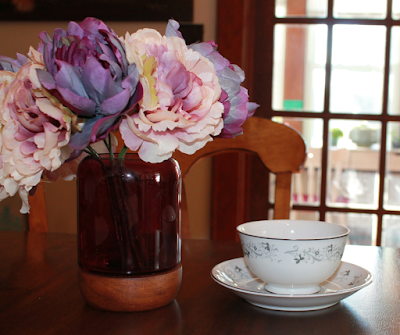 I’m saving up words. I’m stacking one scene at a time. I believe that God has a purpose as I wrap this story in paper and chapters and pack them away for that day in the future when He’ll choose just the right home for it.

What are you saving up? What has God given you that you are stewarding for some day in the future or some person you may not have even met yet?

Don’t be intimidated by the size of the task. God is bigger.

Don’t be intimidated by the size of the task. God is bigger. Don’t grow weary. Borrow strength from the Almighty. Don’t lose #hope. #Jesus is faithful. – via @emilyrconrad

Store it up, one little piece at a time. Pass it on when the time is right. God can do great things with the small offerings of the faithful.

And God will exalt you in due time, if you humble yourselves under his mighty hand by casting all your cares on him because he cares for you. Be sober and alert. Your enemy the devil, like a roaring lion, is on the prowl looking for someone to devour. Resist him, strong in your faith, because you know that your brothers and sisters throughout the world are enduring the same kinds of suffering. And, after you have suffered for a little while, the God of all grace who called you to his eternal glory in Christ will himself restore, confirm, strengthen, and establish you. To him belongs the power forever. Amen. 1 Peter 5:6-11, NET