On Waiting and Working Through Times of Change

by emilyconrad@sbcglobal.net | Jun 7, 2018 | Emily Conrad, Holding on to Hope in the Waiting, On Waiting and Working Through Times of Change, waiting with Jesus | 14 comments 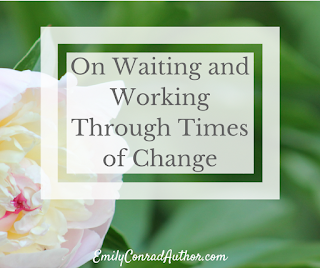 I’ve never done well with change, and there seems to be a lot of it right now. Maybe not change outright, but a certain shifting is underway. Perhaps the most pronounced shift happened Sunday morning at 6 AM, when we delivered our international student to the airport so she could return to her family and friends in China for the summer.

This is simply a shift. She’s expected back in our house next fall for her senior year.

Meanwhile, other moments seem to be too stubborn to arrive.

I warmed winter by telling our student about the peonies that would grow all around the yard come spring—peonies I’ve been waiting for for two years.

When we bought this house, I planted a dozen or so around the yard in just about every spot I could dig. But peonies don’t bloom the first year after they’ve been planted or moved, so the result was that last year, only one pushed out one bloom.

This year, I told our student, would be different.

As soon as it warmed, I watched the peonies labor past the weathered mulch. I monitored their leaves and the tiny hard beads that swelled into buds. I noted the ants stationed on those flowers-to-be when the buds were still only about as wide as a single ant. 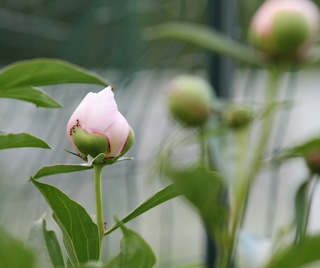 Though I’ve read somewhere that no one knows exactly the relationship between ants and peonies, ants are a promise of healthy peonies. Somehow, this unlikely pair needs each other.

I thought our student would get to see the peonies open, but it was a strange spring. Summer did what she could for about a week there, roasting us with several consecutive days of ninety-degree heat. In a sunnier spot, our neighbor’s blooms erupted—plentiful and beautiful.

One of the buds at our house showed white petal, and then another, but they remained tightly furled.

Meanwhile, our neighbor must’ve decided his blooms were too much. He thinned the plants out and left leaves and blooms to wilt in piles on his front lawn.

Fighting down a mix of jealousy and offense, I tell myself I, too, must sometimes take for granted and discard blessings others would’ve dug a dozen holes for, would’ve told months’ worth of stories in anticipation of, would’ve cherished and displayed more proudly than I. 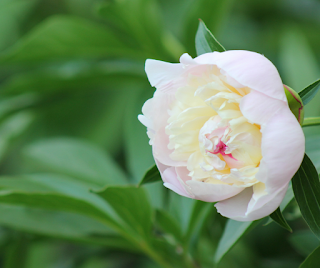 So, as those cuttings faded and the day of our student’s departure neared, I watched and waited. I told our student I thought one would open the day before she left. And then that day arrived, and still, it remained closed. The weather had cooled, and the plants seemed to be waiting for warmth again, on hold until further notice.

We drove by our former home. The peonies aren’t blooming there, either. There is no sign of what was once a profuse collection of them. The new owner must’ve dug them out.

One man’s trash and all that.

And as I typed this, my husband came home and laughed on seeing the front of our house. From my seat on the porch, I couldn’t see what had gone wrong.

One of our window flower boxes fell right off the house, spilling dirt and petunias that had just gotten tall enough to show above the rim of the planter.

They fell right on a peony, but thankfully not on one that had blooms this year.

I went out to salvage what I could and first thought the petunias were a total loss. But then I found them, roots up, submerged in dirt. I dug them out again, gently shook the dirt off, and replanted them. They’ll be all right.

Nothing is without an odd sense of disappointment and struggle lately, it seems.

They shift forward and back, and all with effort and waiting and hopes delayed. None of it is a total loss.

I read a suggestion that one thing the ants might do for peony plants is help the blooms to loosen so they can open. I imagine all the little ant footsteps it must take to unlock such a tightly balled knob, and then it’s no wonder the peonies are late this year.

I went out and cheered on the ants today. The five or so on that particular bud did seem to be moving in a bit of a frenzy, but still, they only have their little ant feet to work with. 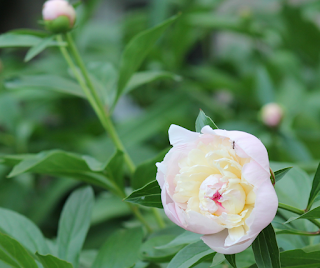 And yet, over the course of the couple of hours it took me to write this post—interruptions included dinner, a dog walk, saving the petunias—not one but two of the peonies have opened. By the time I finalize this post, and even later, by the time it goes live, there will be more.

They act like heaven, too, don’t they? The slow bloom. The willingness to wait for the right moment. The millions of mundane moments leading up to the bliss of glory.

Each day we live, each action we take, constitutes one little ant step toward the moment when we’ll bloom in the presence of our Maker and Redeemer. Maybe these shifts we feel, these moments of loss and waiting and change, aren’t things loosening to fall apart beneath our feet.

That’s how the ants see it, when the peony bud finally starts to come undone, but the human eye can see that the petals aren’t falling apart. They’re opening into what they were crafted to be.

And when our Creator sees us navigating changes and shifts, perhaps what He sees is a grand becoming. 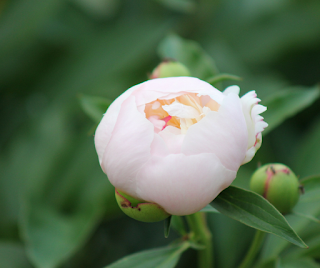 Maybe that’s what this season of shifting is all about. One more petal is in place. The long-awaited moment is that much closer. This isn’t the moment to panic. This is the moment to celebrate the making of all new things, all things blooming just as their Designer commanded.

And when we’re in relationship with Him, we won’t miss the moment. It won’t come two days too late, the way the peonies missed our student.

I want the times of shifting transitions to end, and I want the blooms, but the Creator’s way isn’t to give us these things at our command or on our timeline.

He is constantly doing a new thing. The shifting doesn’t stop. He uses tiny ant feet to produce change. He watches the process and deems it good.

This isn’t the moment to panic. This is the moment to celebrate the making of all new things, all things blooming just as their Designer commanded. #change #encouragement @emilyrconrad