Notes on Faith and Fire from Sequoia National Park 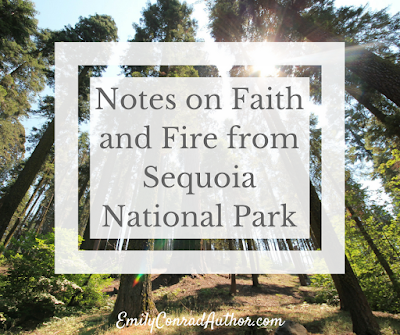 Our necks stiffened as we craned to see the sequoia branches and crowns high above us, but as peaceful and beautiful as the sequoia groves were, the trees bore signs of suffering.

The largest trees often had big, black triangles on their sides, scars left behind by fire.

With so much of forest fires in the news as of late, we know blazes endanger and kill when they burn too big and too hot. It’s understandable that in the early days of Sequoia National Park, park administrators stopped fires from burning among the towering trees. Though their intentions were to protect the trees, eventually their error became apparent.

New sequoias weren’t sprouting, and the build up of brush, plants, and low branches increased the likelihood of a fire roaring through that could kill even the mature sequoia trees by burning them not only around the trunk, but by burning them top-to-bottom.

Now, the park sets some controlled fires in order to promote health in the sequoia groves. (Learn more and see where I got this info from here and here.)

Mature sequoias can survive the heat, and the saplings depend on it to even get their start.

These, the largest trees in the world, rely on fire to survive. 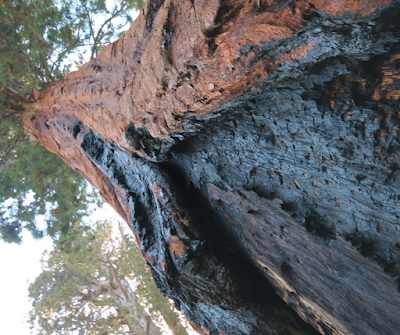 We–or I, anyway–sometimes face the temptation to fireproof my life. I opt to play it safe with relationships, finances, health, etc. If something seems likely to cause pain and suffering, I stomp out the danger at my earliest opportunity.

By doing this, I can put myself in an even worse situation. Living in fear rather than by faith does this.

What if God has called me to what I estimate will be a difficult situation? If I douse the difficulty He called me to face, I can put myself in even worse circumstances down the line.

Besides, I can never prevent all trouble from igniting.

Not that we ought to practice risk unnecessarily, but as Christians, we shouldn’t expect to avoid all trouble, and we needn’t fear it when it comes.

Dear friends, do not be astonished that a trial by fire is occurring among you, as though something strange were happening to you. But rejoice in the degree that you have shared in the sufferings of Christ, so that when his glory is revealed you may also rejoice and be glad. 1 Peter 4:12-13 NET 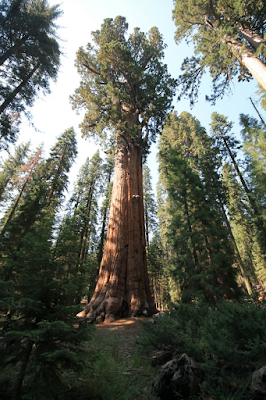 Living by faith means acknowledging that my idea of safety may not be the same as God’s–and following Him anyway.

Living by faith means rejoicing despite the fiery trial, trusting that God loves me. Even when flames rise, He is good, and He does good. (see Psalm 119:68)

Not only this, but we also rejoice in sufferings, knowing that suffering produces endurance, and endurance, character, and character, hope. Romans 5:3-4 NET

Hope. That has to be one of my favorite words.

So it seems to me that Christians rely on fire at least as much as the sequoias do.

Trials can turn us again, more wholly, to Jesus. They can deepen our faith and fuse our hopes to heaven. They can show us who we are and who our God is.

They show us that whatever fire burns around us, we can have hope in Jesus.