Navigating Toward Jesus by the Night Sky 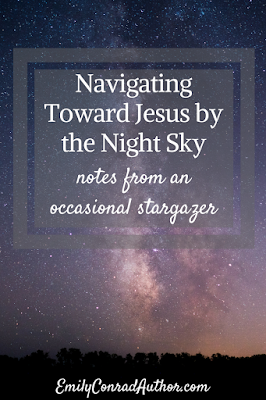 More than fifteen years ago, I stood in a clearing the woods in Wisconsin with my youth group. We were cold, and it was dark, but the view was more than worth it. I tilted my head to scan a sky more full of stars than I ever remember observing in my life to that point.

We were told the extra-dense band of stars stretching from one side of the sky to the other was the Milky Way. How had I lived on the earth, under this glory, for so long without seeing it sooner?

In the following years, I remembered that there were more stars than I could see from home, but the exact image of what I’d seen faded.

I occasionally tried to seek it out again. I don’t live in a major metropolitan area, and I’m sometimes driving through national parks after dark, but I could never see as many stars as my memory said were out there, visible under the right conditions.

Was it just a childhood memory that I’d enhanced? Or were they were there, waiting to be seen again?
Driving through Grand Teton National Park after dark on our way to Jackson, WY, where we would be staying last week, I took a break from scanning for animals–I couldn’t see anything other than knee-high brush lining the road anyway–and looked out the passenger window.

Light pinpricked the sky, a backdrop to the looming shadows of jagged mountaintops. With stars and mountains combined, I knew we were going to like this place. 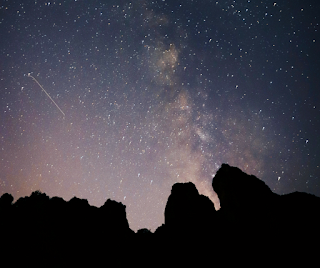 A few nights later, my husband and I left our room after dark and drove that road again. We pulled into a turnout positioned to gaze at the mountains and tilted our heads toward the stars instead. Adam decided there was too much nearby traffic and took another road to another turnout, where we parked and got out.

Standing there, again wondering at the Milky Way after fifteen years and about the God who created it, I realized how little I knew about the galaxy that hangs overhead constantly.

I’d heard sailors used to navigate by stars, but I certainly could not, and I didn’t even know if that art was still used. (It is, and not just by sailors.)

I didn’t know why stars twinkle–they never seem to when I looked at them from home, but out there, the light shimmered. (The atmosphere interferes with the light’s path.)

I wasn’t sure that the stretching band of stars we’d been told was the Milky Way was actually the Milky Way. (It was, and it turns out, there’s another galaxy visible through binoculars!)

I didn’t know why it was so hard to get away from light pollution near my hometown in order to see more clearly. (Turns out, my area is in a big, far-reaching glob of light in the Midwest. If you want to check your sky, try this.)

But my inability to see the stars and my unanswered questions about them didn’t change the fact that they were an extravagant constant, always waiting on the other side of clouds and daylight and light pollution. 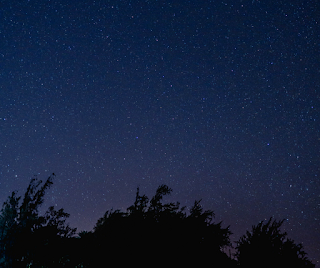 God is like that, too. He’s closer than the stars, and more beautiful, but sometimes our view is polluted, and we just don’t see Him. We’ve all got some questions that are unanswered, big portions of God we can’t understand because He’s so much bigger than us.

But none of that changes the fact that He’s omnipresent, His goodness and love, extravagant constants.

It’s worth the effort to leave the pollutants behind in order to see Him more clearly, to know Him more deeply.

The pollution in each of our lives is a little bit different. For me, it’s the writing projects I’d allow to distract me from spending my own personal time developing that relationship with God. It’s my discomfort with sitting with Him when I could be “doing something productive.”

What is it for you, shining in your eyes so you miss out on the true Light? What would it take to get away and to see again?

The sky itself helps us navigate toward Him.

Looking up, I see that the God of the universe is big enough to have hung the Milky Way. He’s concerned enough with detail to know the name of each little pinprick of light that wiggles its way through the atmosphere to reach our searching eyes. He created the universe, from the grandiosity of the sky to the minutiae of bacteria.

The Bible also uses the sky to point us toward Him.

The psalmist uses the sky in Psalm 103 to illustrate the greatness of God’s love for us.

For as the skies are high above the earth,
so his loyal love towers over his faithful followers.
As far as the eastern horizon is from the west,
so he removes the guilt of our rebellious actions from us.
Psalm 103: 11-12, NET

The sky shows us just a glimpse of how much bigger Jesus is than us, how great His loyal love is.

In response, let’s pack our bags and travel as far as we must to see Him more clearly. Let’s clean up the pollution and gaze long and hard at the wonder of wonders, the God who saw fit to enter the world He created and to die for us.

#Jesus is closer than the stars and more beautiful, but sometimes our view is polluted. via @emilyrconrad #faith

Trees and stars photo by Brannon Naito on Unsplash

Mountains with stars photo by Wang Xi on Unsplash