Me and the Sidelines: A story of trying to fit in by sitting out

by emilyconrad@sbcglobal.net | Nov 21, 2017 | acceptance, Me and the Sidelines, more than conquerors, perfectionism, self image, trying to fit in my sitting out | 4 comments 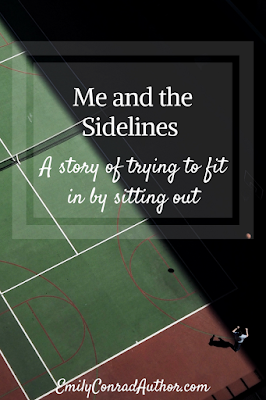 The pitcher paused before rolling the kickball toward me to call to the rest of the team. “Everybody move up!”

The outfielders obeyed, coming into the infield because I was up to kick, and everybody knew the ball wouldn’t exactly fly.

One glorious time, I managed to launch the ball back out and over the pitcher’s head, but that fluke didn’t negate all my other kickball experiences.

I was learning a belief about myself: I’m not good at sports.

Oh, and also: I don’t like people to notice I’m bad at something.

Oh, and also: People are more likely to notice I’m bad at sports than other things like art or academics. 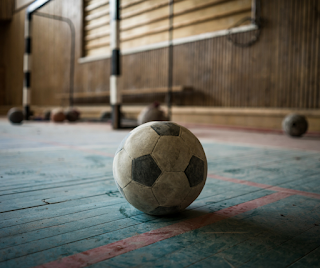 Still, I dabbled in sports. I was good at soccer after I’d warmed up. I did some gymnastics (though I loved it, I wasn’t good at that, either, no one really took much notice of me. The benefit of individual sports…).

In high school, I generally played the games my youth group organized. As a student leader, I was even in charge of games some nights, and I remember hiding out from games only once, when another student leader’s idea of a game was blowing Cheerios out of one’s nose for distance.

As an adult, I find myself less adventurous. The idea that I’m not athletic has taken deeper root. I worked with the girls’ Bible study for a few years, and last year, I officially became a leader at youth group, too, but I took the easy way out of game time. I stood on the sideline.

From my vantage point at the sideline, I watched students get into the games, exerting visible effort and enthusiasm. Leaders did, too.

They really let themselves get into the game. They weren’t self-conscious about how they looked or how they performed. (Well, yes, okay, maybe a little, but not enough to let that stop them.)

From the sidelines, I could see myself pretty clearly, too. I knew I was taking myself too seriously. I knew I was trying to control how others perceived me. If I played the game, I’d introduce the wild card of my athletic prowess (or lack thereof) to the equation of acceptance. I justified sitting out despite all this by considering myself bookish, by trying to strike up conversations with the students who also chose not the play.

But the problem was, I didn’t even like participating in the more bookish games that relied, say, on memory and not athletics at all.

The real root of the problem? I didn’t want to try real hard—visibly try—and fail. I wanted to be perceived as a winner so people would like me.

That mentality will sideline us faster than anything.

Throughout that year, however, I began to notice something: most of them weren’t superstars, either (no offense, if any of you are reading this). In fact, they played a lot like I would’ve, except instead of acting like their worth depended on their performance, they tended to laugh it off. Or, maybe some of them frowned or showed disappointment, but not in an unhealthy way. Instead, they got back in line to try again. It happened to everyone at one time or another, getting knocked out of the game in seconds. 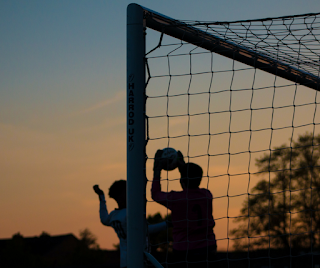 My friend Jerusha Agen recently mentioned in a post that insecurity and perfectionism like what landed me on the sidelines at youth group often has a root in pride. She’s right. In my pride, I didn’t want to humble myself to do something I thought was beneath me. You know, like, fail…

But in truth, the only people who didn’t fail at the game at one point or another were the ones on the sidelines.

Ironically, in my effort to fit in by not failing, I’d separated myself from the group. I didn’t bond with the students or the other leaders as much.

Regardless of the area of life, hanging back in fear of failure will not bring us success. We can’t fit in with a group we won’t join. We can’t win a game we don’t play. The ones who lose are the ones who don’t try in the first place.

Yes, it’s likely we’ll try and fail. I’m a writer through and through, but I still get rejections. I still get critiques I don’t agree with, and I still sometimes give critiques that aren’t as helpful as they ought to be. But despite my failings, I’m part of the writing community.

I’m in the game, and what I can tell you from the thick of it is we’re all bad at this game. Whether we’re talking about youth group games, life, conferences, writing, eating healthy, or even holiness–if you can name it, humans can and do mess it up.

We can’t let fear sideline us. We can’t shy away from participating because we might fail.

Win, lose, or draw in lesser things, in Christ, we are more than conquerors. Because we all fail at living correctly before and with God, He took our place in the arena. He died and rose again, securing the ultimate victory for those who follow him so that now, if He is for us, nothing can stand against us. We already have all the approval and victory we’ll ever need.

We’re free to follow Him off the sidelines into whatever He’s called us to, assured that in the most important ways, we are guaranteed a win when we play on His team.

This year, when youth group started back up, I decided to join in the games.

It takes planning. Before we leave for youth group, I reconsider my shoes and clothing. Will I be comfortable in these clothes if the game involves running around? Because I know myself. I’ll use any excuse to avoid the danger of putting myself out there and failing.

And you know what? I’m not too bad. I can hold my own. Usually. (In large part because the most competitive players tend to focus on each other and forget about me, but I’ll take what I can get…)

But when I’m out early in a round, I’m in very good company.

Everybody is bad at this game, and that’s okay, because Jesus has already won.

Hanging back in #fear of #failure will not bring us #success. We can’t fit in with a group we won’t join. We can’t win a game we don’t play. via @emilyrconrad