Life Lessons from a Left-for-Dead Hydrangea 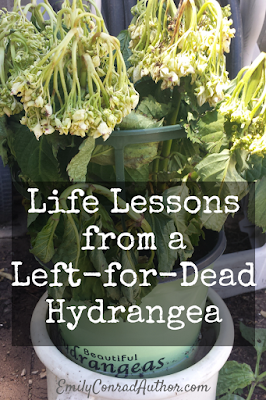 On June fourth, I walked through the grocery store and saw a wilted hydrangea plant on an odd, wooden, makeshift rack as tall as myself, waiting for a home.

It had been marked down from $9.99 to $2.99 but was so dehydrated, I wasn’t sure it would survive. (The title image is it in its original glory.) Looking for a second opinion, I sought help from a nearby shopper by asking, “Do you think it’ll come back with water, or is it too far gone?”

She gave some kind of non-committal shrug and walked on.

I chewed my lip, pictured how pretty cut hydrangeas are and how small the bush is that I planted last year, and then decided I could gamble three dollars on the chance that it would survive. It was, after all, still green despite being horribly wilted.

I moved aside my groceries and fit the container in my cart then proceeded along the aisle only to meet up again with the shopper who hadn’t given her opinion when I asked for it.

She saw the plant in my cart. I learned as she tried to talk with me then that there was some kind of language barrier, but both of our intentions were obvious: I had the plant in my cart, after all, and she kept shaking her head and moving her hands, flattened and horizontal to the ground, back and forth in a signal for, “No, don’t do it.”

Confidence badly shaken, I looked back, wondering how discretely I could return the hydrangea to it’s original fate of death by dehydration. I was both embarrassed to proceed with the purchase and embarrassed to put it back.

But when I looked back, I found the staff had already, in the two minutes I’d had the plant, come through and removed the entire rack it’d been displayed on.

How had they moved something so big so quickly? And without my noticing?
Regardless, there was nowhere to return the plant.

Chewing my lip again, I proceeded to the checkout. My cashier was a man who looked to be in his twenties, maybe even college age. I doubted I could ask him if my investment was sound. I was encouraged, though. How would a guy like this know I was buying a loser plant?

But maybe he would silently judge me.

I knew I was betting on the underdog by buying the plant, and I wanted him to know I knew that. You know, to save face. So, I repeated my question to him. Do you think it just needs water, or is it dead already?

Though he didn’t seem to know either (and I can’t judge that since I was so torn myself), he surprised me with sympathy. He pressed some extra keys on his register and said, “I marked it down to ninety-nine cents for you.”

The plant? That still needed care. But me? I perked up right away. I could risk a dollar.

I took the plant home and plunked it in water. I let it soak for hours.

By the next day, many of the leaves and some of the flowers had regained their shape. I trimmed off the parts that stayed wilted so the plant could focus its energy on the healthy leaves and branches. Now,  two and a half weeks later, several of the initial blooms have blessed me by beginning to turn a soft pink–something I didn’t even know to expect with what I’d thought was a standard white hydrangea. Additionally, an entirely new head of flowers is coming up, as are a number of new leaves.

Here are some pictures I took of it today. 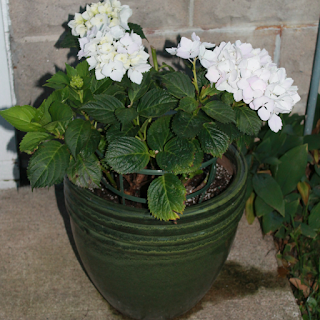 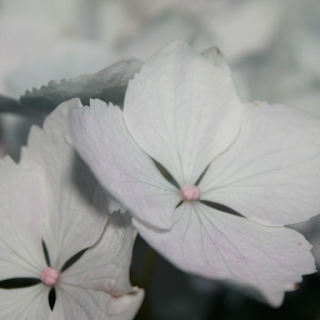 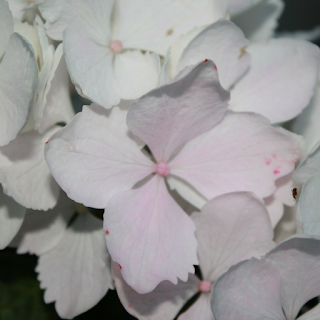 So, here’s what I learned:

Stereotyping is bad. Middle aged woman grocery shopping? She must know enough about plants to advise my decision. Twenty-something man? He won’t be any help. Wrong and wrong.

Not all well-meaning naysayers are right. I was the only person with anything on the line one way or the other and I had to make my own decision: was I willing to risk the $3? Yes, I’d decided that when I picked up the plant, and I think having that rack removed was God’s way of telling His little people-pleaser to keep hoping, to remember that the potential reward was worth the little risk. I imagine Him chuckling as I looked aghast down that aisle at the impossibly empty space. With that, I imagine Him saying, “Stay the course. I have something good planned.”

Not all wilted things are dead. Care goes a long way toward reviving that which has been neglected.

Pride can stop us from acting on our hope. It’s humbling to invest in something only to have it fail. It’s embarrassing to spend resources that don’t yield a return. People will notice. Some will judge and some will sympathize. But in the end, it’s not their investment on the line, and they don’t benefit no matter what we decide to pursue or abandon, so we can’t let our pride or our fear of losing face tie our hands–or our hope.

What neglected thing are you circling today? What dream or relationship or project or talent do you feel that nudge to invest in reviving?

If there’s no harm in trying, why not try? Your act of wild hope just might turn out even better than you’d dreamed.