Is It Time to Slow Down?

by emilyconrad@sbcglobal.net | Jan 10, 2019 | Achieving Goals, Dreaming with God, Emily Conrad, Is it Time to Slow Down, rest for the weary, Resting in God's love | 10 comments 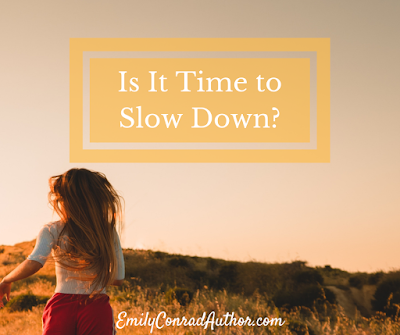 I may not be one for resolutions, but I’m goal-oriented.

I wrote lists about how to get there, then I ran that direction.

And would you believe, just one week—one week!—into 2019, I’ve already encountered discouragement on my way toward one of my goals for the year.

It started with the idea that I could produce a submission-ready manuscript within a couple of months. I started in late 2018, so the plan was to finish the first draft by the end of January, 2019.

Since it usually takes me a year to write and polish a manuscript, I don’t know why the idea that I could accomplish this in a couple of months took over. Pride? Comparison? Impatience? Perhaps some misplaced worth? (The answer is E-All of the above.)

So, there I was, rushing down my planned course, my dreams heavy on my back, pride and impatience nipping at my heels, and that’s when I tripped and fell face-first into discouragement.

The setback I tripped over is in no way detrimental to my writing project, though it may push back how long the manuscript will take to complete. I could’ve gotten back up and kept working, but instead, I found myself neck-deep in discouragement and doubts.

Why had I made the plan I made? Was it my ambition, or was I following God? How would I know? What should I do now? Go back to the old manuscript? Take a few days off? Write something new? Find a day job?

I suspect anyone who’s been pursuing a dream long is familiar with bouts of discouragement like this.

As I wrestled with these feelings, wondering what God wanted me to do now, some circumstances combined, and within the space of an hour or two, I went from asking questions to feeling the peace of a surprising answer:

You don’t have to rush this.

The deadline–the project itself, in fact–was self-assigned, and nothing bad will happen if it takes me longer than I initially planned. The end result will likely even benefit from extra time, and my emotional and mental well-being will, as well. Why was I so set on rushing? 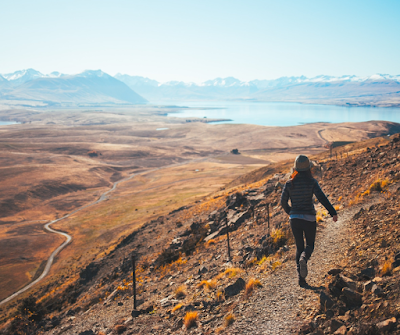 We want to GO places. We want to DO things. We want to make our dreams come true. We can get so hungry for validation and a sense of accomplishment, that we push ourselves at a pace we weren’t cut out for.

But when we rush like this without listening to Jesus telling us to slow down and walk with Him, we’re running headlong toward burnout and discouragement.

When we rush without listening to #Jesus telling us to slow down and walk with Him, we’re racing toward #discouragement. via @emilyrconrad

Let’s stop sprinting when God signed us up for a marathon. Isn’t that what the biggest dreams in life are? If we persist in going at break-neck speed, eventually, we’ll trip and look around for Him, and then we might find He wasn’t as on board with the pace as we thought He was.

Even when we’ve tried to run ahead, He’s gracious. He picks His children back up. He dusts us off. He shows us the way and asks us to honor the pace He sets–a sustainable one powered by His strength and not our own. Since we can accomplish nothing without Him, this is the only true way forward. 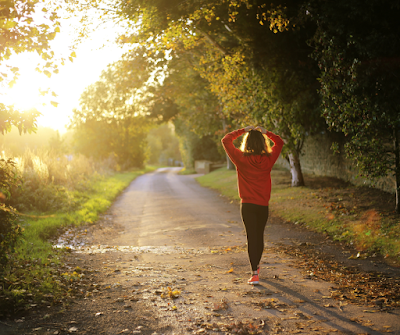 This doesn’t necessarily mean His ways will make sense to us. Often, He chooses to walk when we would rather run. He routes us directions we don’t understand. He makes us lie down in green pastures.

In Christ, we already have what we most need: love, worth, purpose, and the hope of salvation.

With all of the blessings He’s already granted to us, we’re free to go at God’s pace through the course He’s charted for our lives. As long as we’re following Him, we won’t go off course, and we won’t arrive late.

As long as we’re following #Jesus, we won’t go off course, and we won’t arrive late. via @emilyrconrad

Come to me, all you who are weary and burdened, and I will give you rest. Matthew 11:28, NET

The Lord is my shepherd,
I lack nothing.
He takes me to lush pastures,
he leads me to refreshing water.
He restores my strength.
He leads me down the right paths
for the sake of his reputation.
Psalm 23:1-3, NET

PS – I had the honor of posting on the ACFW blog this week. If you’re a writer (or really, anyone hungry for acceptance), perhaps you’ll be encouraged by this post on Finding Acceptance in a Tough Writing Industry.

We can get so hungry for #validation and a sense of #accomplishment, that we push ourselves at a pace we weren’t cut out for. But #Jesus offers rest. – via @emilyrconrad

Woman walk on trail photo by Emma Simpson on Unsplash