I Can See the Sky from Here

by emilyconrad@sbcglobal.net | Oct 25, 2018 | Emily Conrad, faith through trials, Hope in Jesus Christ, I can see the sky from here, Psalms of David | 6 comments 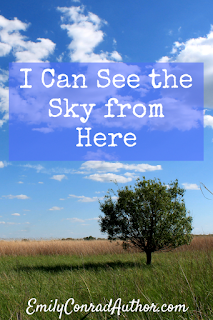 It’s nine o’clock in the morning, and my house has surprised me twice already with unexpected glimpses of sky.

Somewhere between five and six a.m., I walked into our bathroom. The rice-paper-like covering over the bottom half of the window shone orange.

The window faces east, toward my neighbor’s two-story house. And I’ve walked around the block plenty of times to know that between us and sunrise are other houses and trees and fences.

And yet, that window was orange, and when I leaned closer to the just-barely-translucent window applique, I saw the unmistakable ball of light that could only be the sun.

Until then, I didn’t know I could see the sky from there.

Hours later, I was reading my Bible on our enclosed front porch. I looked up into the large maple tree that spreads its arms in front of our house. Through one of the thickest parts of the tree, a brilliant blue patch of sky drew my attention. And once I noticed that one, I saw a few others, too.

I hadn’t realized I could see the sky from there. 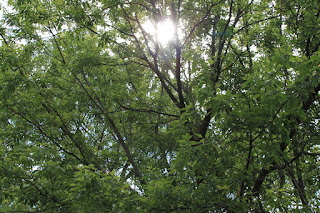 A few weeks ago, I was driving my dog Sadie to the vet. I’d attempted to steel myself for the visit, knowing it would be difficult. My dog had been vomiting, not eating, drinking little, and acting lethargic. We’d been told she would need x-rays because this kind of trouble usually meant something was blocking the digestive system.

Either she’d eaten a part of a toy, which would have to be surgically removed, or perhaps it was cancer, which would’ve been a scary enough prospect even if it weren’t five years to the day from when our black lab died. Of cancer. That they diagnosed by doing x-rays because she’d skipped a couple of meals.

As I drove the familiar streets, I prayed. The trip was just me, Sadie, and God, and if I was going to make it through without being a sniveling mess who stressed out my dog and alarmed the vet staff, God was going to have to be the one to make it happen.

A little over halfway to the vet, as tears were pressing at my eyes and I was navigating a tree-lined street, something moved overhead.

In the stripe of blue between the trees on either side flew a group of about five pelicans.

I was shocked and thrilled when I first saw these eagle-sized birds a few years ago. Until then, I hadn’t realized they would ever come to Wisconsin. Then, I learned these pelicans come every summer to a breeding ground in one of the lakes that flanks the city where I’ve lived my whole life. Now, I see them often, but usually closer to the water. 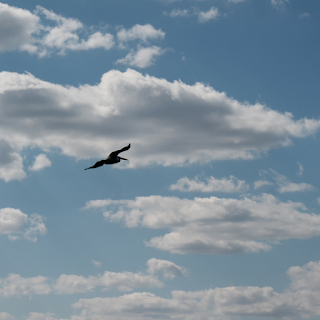 Maybe it’s that God’s eye is so famously on the sparrow or simply that I find birds interesting or that God brings them into my line of sight at just the right time some days, but there’s something about special birds like the pelicans which reminds me I’m loved by God. He’s got me and my situations well in hand.

The sight of those birds soaring through that sky calmed me as I drove to the vet, and from then on, I managed much better. My tears dried up, I made it through the appointment. And though the point of this post would still be true if it hadn’t worked out this way, my dog had nothing blocking her digestive system and is now healthy again.

Even driving to the vet, sleep deprived and stressed and eyes watery, I could see the sky–and not just any sky but just the right stretch at just the right time to know that God loved me and cared enough to commission a group of pelicans to fly inland a few blocks for a fly-by so His daughter would feel that much less alone.

In Psalm 31, David writes,
I will be happy and rejoice in your faithfulness,
because you notice my pain
and you are aware of how distressed I am.
You do not deliver me over to the power of the enemy;
you enable me to stand in a wide open place.
(vs 7-8, NET)

David is distressed—present tense—but he also praises God for enabling him to stand in a wide open place—also present tense.

Despite his suffering, David praises God for deliverance like it’s already happening. His feet of faith are planted in a wide open place where he can see the sky and evidence of the loving care of his Father. 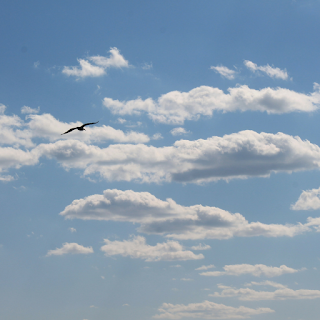 The angle from where we stand might seem impossible–we’re too far down, too surrounded, our eyes too watery–to see Jesus. Yet with God, all things are possible. 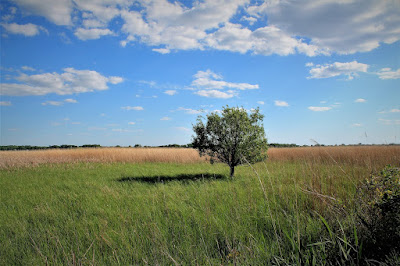 He is in the midst of any situation. No matter where we stand, as believers, we can see the sky when we open our eyes of faith.

Sometimes, that’s easier said than done. Sometimes, we look at the sky overhead, and it remains cloudy. No sun, no birds.

But even then, we can echo David with Psalm 31:8 knowing it is true. We stand in a wide open space.

We can recite Psalm 139. God is not only guiding us, He is grabbing hold. He’s setting His precious children beneath the bluest sky and opening our eyes to see His steadfast love at work around us.

In the best and in the worst of circumstances, we can say with confident hope, I can see the sky from here.

God is not only guiding us, He is grabbing hold. via