Holding onto Hope in the Waiting

by emilyconrad@sbcglobal.net | May 2, 2017 | Emily Conrad, faith through trials, Holding on to Hope in the Waiting, keeping the faith, listening to God's voice, waiting with Jesus | 5 comments 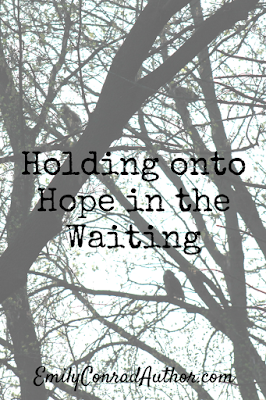 I sat in my parents’ backyard, waiting to spot the owls that had nested there. A cardinal landed, brilliant red against the new spring grass, and I contented myself with photographing him. When I refocused on the tall pines before me, their scraggly branches mostly bare until their upper extremities, I didn’t mind so much that I saw no owls. I believed the owls would appear eventually, so I was ready to wait and wait. And then my mom came out.

“They may have left already,” she said.

I scanned the still pines. “But we just saw them last night.”

Last night, the owls had been three dark silhouettes against a deepening sky. Even with my zoom lens, I hadn’t been able to get a good picture. I’d returned early this morning because I’d been assured the owls came out between seven and eight every day, and that’s when my sister got some good pictures of them.

“The baby may have learned to fly,” Mom said. “When that happens, they just leave. He probably started flying last night. He was getting close.”

I frowned out at the woods, sat a couple of minutes longer, then, feeling disappointed and a little foolish for coming the very morning the owls had left, I wandered into the house. My family had been talking about the owls for a week already. Why hadn’t I come sooner?

“Giving up?” Mom asked.
I shrugged and looked out the patio door to the woods one more time.

And then I saw it. Light catching on the back of a gigantic bird as it navigated the narrow spaces of the pine forest. “They are here!”

Another hour and a half of staking out the woods ensued, and I ended up with some pretty good pictures. 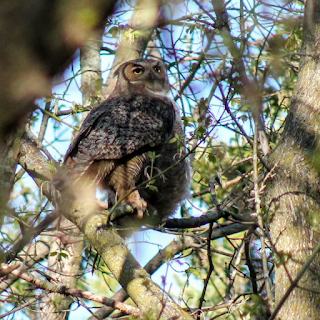 My mom has been my biggest encourager in the waits associated with my writing career. She’s believed for me when I had stopped, and she’s always cheered me on. But in the case of the owls, if I’d listened and left, I would’ve missed out.

What are you waiting for?

Who is telling you that you’ve already missed it? That it’s too late, and it’s not going to happen?

It’s amazing the impact just one discourager can have. We can go from committed and confident to unsure and insecure, especially when the person sounds like they know what they’re talking about.

But maybe the naysayer is wrong, and maybe what you’re waiting for is right around the corner.

The only one who can say for sure is God.

That’s why a personal, growing relationship with Jesus is so important. If our faith relies on other people or on a list of do’s and don’ts, when someone speaks a “do” or a “don’t” into our lives, we’re so apt to latch onto it. 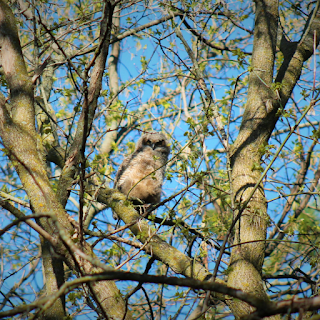 But if our faith is based on knowing God and walking with Him through the unique plan He has for each of us, we’ll know impostors’ voices from His.

Speaking of Himself as the Good Shepherd, Jesus says in John 10:4-5, “When he has brought all his own sheep out, he goes ahead of them, and the sheep follow him because they recognize his voice. They will never follow a stranger, but will run away from him, because they do not recognize the stranger’s voice.” (NET)

If we are one of His, He leads the way for us. By spending time with Jesus, we learn to recognize His voice and to distinguish the voices of impostors whose discouragement we shouldn’t listen to.

Jesus’ voice alone is the one that should be guiding us, telling us when to move and when to wait. He will be the one to lift our eyes to the right spot at the right time so we won’t miss anything He has for us. He’ll reignite hope and lead us in His good plans and in the way everlasting.

If the voice telling you to give up is anyone’s other than His, run the other way. Hold on to hope. Watch and see. Follow the Shepard’s voice and none other.

Holding onto #Hope in the #Waiting, a lesson from owl-watching via @emilyrconrad