by emilyconrad@sbcglobal.net | Feb 15, 2018 | Emily Conrad, Here's to Hope, Holding on to Hope in the Waiting, Hope in Jesus Christ | 6 comments 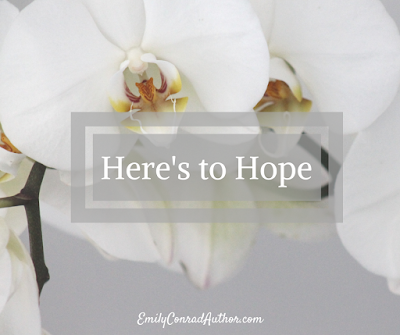 Inspired by my mom, whose orchid plant rebloomed after years of faithfully administering ice cubes each week, I invested in some orchids of my own.

When I bring an orchid plant home from the grocery store, it’s full of beautiful buds. Whether we’re talking aspirations or orchid plants (or both), it takes that initial promise to get us started, doesn’t it?

The beauty draws us in. Enraptured, we vow we’re going to care for it and see this through. But then the flowers shrivel. The flower spike hardens and dries. The leaves stay green, but is anything going on in there? Weeks stretch to years.

But to the persistent, the story isn’t over.
I put my orchid in a prized place. I set reminders on my phone to stuff one ice cube after another under those lovely green leaves.

And like this, I’ve kept my first orchid alive.

(Side note: I subsequently killed a larger one, and now I’ve have taken on the challenge of a few new orchids, inspired by some ideas I saw in a magazine. These new plants are the flowers in the photos throughout this post.) 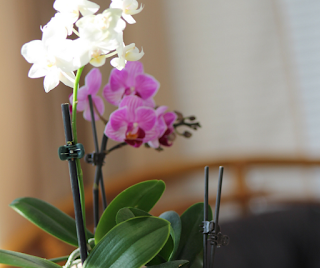 It’s been a few years since I brought home my first orchid. The small plant once grew something green and promising—a root? A flower spike?—but the new growth promptly shriveled and died.

Over the last few years, as I’ve waited, I believe my mom’s orchids have rebloomed a few times. Meanwhile, nothing but the occasional new leaf for me.

Until recently, that is. I moved it to our bathroom, hoping the humidity and the muted sunlight from the window, would make it an ideal environment. Shortly after, it sprouted another new leaf. Then a new green growth—a root, I think after some Internet research—has taken shape.

And just this morning, I noticed one other tiny green nub growing at the base of the plant, one that’s far too small to identify as a root or a flower spike just yet. It’s too small, even, for a good picture. It shows as a yellowish point of light on the left side of the stem of the plant in this picture. 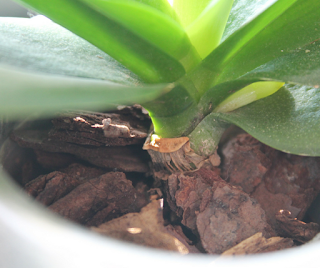 I’ve read online that orchids like mine often produce new leaves and roots shortly before a flower spike, so here’s to hoping.

And actually, that’s the point of this post: Here’s to hoping.

Here’s to remembering the beautiful potential of something long-since faded.

Here’s to persevering when a moment of promise turns to disappointment.

Here’s to keeping at it, though there are no visible signs of growth.

Here’s to not giving up when success doesn’t come for you as soon as it comes for someone else.

Here’s to celebrating when things look up. 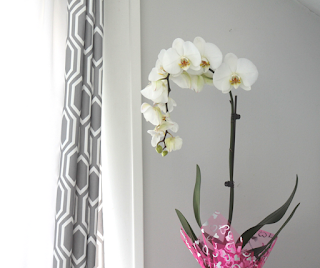 Here’s to the Master Gardener, whose patience puts mine to absolute shame, who never met a dormant season He couldn’t revive, who will never fail to coax blooms out of difficult circumstances.

I never tire of Romans 5:5. I’ve quoted it here before, and I’m sure I will many more times. In fact, I also quote it in my debut novel, Justice. Though I wouldn’t say I’ve chosen a life verse, this one certainly seems to hang around.

Not only this, but we also rejoice in sufferings, knowing that suffering produces endurance, and endurance, character, and character, hope. And hope does not disappoint, because the love of God has been poured out in our hearts through the Holy Spirit who was given to us. Romans 5:3-5, NET

Here’s to the Master Gardener, whose #patience puts mine to shame, who never met a dormant season He couldn’t revive, who will never fail to coax blooms out of difficult circumstances. #faith #hope via @emilyrconrad