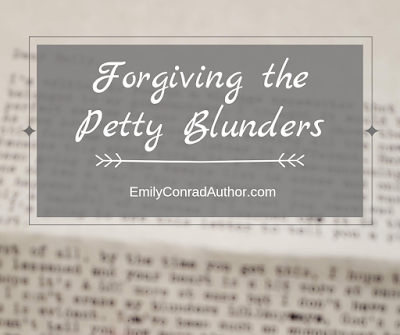 I received a typewritten letter (as in, actually typed on an old typewriter!) from fellow Christian fiction author Rachel Scott McDaniel. *

In the letter, Rachel typed a line that immediately stuck out to me. It was a simple line, really, asking me to overlook any typos because:

I don’t have a Delete Key so I can’t erase my blunders.

For the record, Rachel didn’t need to excuse any typos in the letter she wrote me. It was charming and encouraging from start to finish!

But as I read that line, I realized how much I like my Delete Key on my computer. That time I bought a ring with a vintage typewriter key on it, guess which key I chose? Backspace.

How helpful it would be to have a Delete Key that worked beyond the screen.

Since I don’t have one to erase my real life blunders, I’m dependent on the mercy of others. And they’re dependent on me, too. And perhaps forgiveness of small matters–the petty blunders–is more important than I realized before. 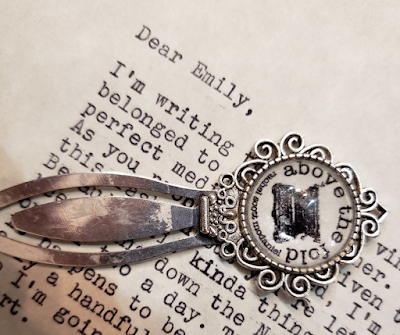 As a sinner saved by grace, I’m so grateful for the forgiveness extended to me.

When Peter asked Jesus how many times he needs to forgive a brother for sinning against him, Jesus replied with the parable of the unforgiving servant.

“Then his lord called the first slave and said to him, ‘Evil slave! I forgave you all that debt because you begged me! Should you not have shown mercy to your fellow slave, just as I showed it to you?’ And in anger his lord turned him over to the prison guards to torture him until he repaid all he owed. So also my heavenly Father will do to you, if each of you does not forgive your brother from your heart.” (NET)

We cannot underestimate how serious God is about forgiveness. We MUST extend it to others.

I usually apply this to the sins others have committed that have really affected my life, and that is an important (and challenging) application.

Father, help us to forgive as we ought.

But the parable seems to be based on the premise that the other party had, indeed, sinned. Right? There’s no hemming and hawing about how the one servant did indeed owe the other 100 days’ wages.

There was a debt.

I’ve realized I can get offended or hurt or annoyed for less black and white reasons. These are the petty blunders where, despite how I feel, the other person may not have sinned at all. The debt they owe me seems like it would be smaller than what’s in the parable—if they owe me anything at all.

Just when I think I’m above holding petty blunders against others, someone practices one of my pet peeves on social media. Someone shops too close by at the store, crowding me. Someone forgets to use their blinker until the last moment. Someone doesn’t respond when I say hi at church.

I’d bet there are petty blunders that get on your nerves, too.

It seems like the small moments ought to be easier to forgive and respond to in love. After all, we know we’re supposed to forgive! But we can devote a pretty significant amount of mental energy to resenting these blunders instead of showing mercy.

We tell ourselves the other person should’ve known better. We believe the other person did whatever they did on purpose, we suspect we know their motivations, and we judge those motivations as lacking. We take a negative view of actions—and that seeps dangerously into our idea of the person him or herself—based mostly on assumptions and perceptions.

Here’s the kicker: Our perception of the situation might be totally wrong.

Here’s the double kicker (if that’s a thing…): We are the ones suffering, not the person who unknowingly frustrated us.

Here’s the triple kicker (hey, we’ve come this far!): We’re called to forgive, and these really ought to be the easy cases.

And yes, okay, humans do not always have a valiant, noble reason for every action. Sometimes, people (myself included) are guilty. Oh, so guilty.

Sometimes, we need to have conversations with each other about what’s happened. Sometimes, those conversations help, and sometimes they don’t. Either way, as Christ followers who’ve been forgiven so much, we’re called to have mercy. To forgive.

But there are times when I would sympathize with other people’s actions if I knew the whole story. I know this because I’ve been on the other side of it.

For example, my “likes” on other writers’ social media pages have sometimes disappeared without my involvement. I’d be sad if one of my friends noticed my “like” disappear and took it personally. 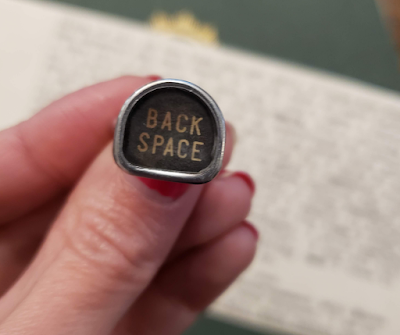 I want others to give me the benefit of the doubt, and God has mercifully forgiven me for so much. Who am I to hang onto a grudge over a petty blunder, a debt that isn’t even significant enough to bring to the other person?

When we come to God through the blood of Jesus, we’re forgiven an insurmountable debt. In turn, we’re to forgive even large debts, so let’s not hold a dollar or two–or worse, an entirely made up debt–against someone else.

I don’t have a Delete Key, so I’m counting on forgiveness from God and from others.

No one else has a Delete Key, either.

May I have mercy because of the mercy lavished on me. 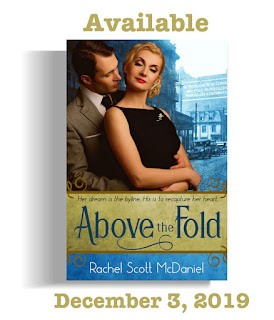 *Why did I get a typewritten letter from the fabulous Rachel Scott McDaniel? So glad you asked!

I’m on the launch team for her debut novel Above the Fold, and in a sweet gesture to say thank you to her team, she mailed letters composed on a typewriter that once belonged to her grandma (!!!) as a nod to the time period in which her book is set. That time period is the 1920’s, and typewriters would’ve been an important part of the lives of her hero and heroine, who are journalists. I’m so excited to read this historical romance!

Here’s a little more about the story:
Set in 1922 Pittsburgh, a newspaper publisher’s daughter and a high-profile journalist compete against each other to land their article above the fold, but the stakes turn higher than nabbing the coveted headline. Hunting the scoop of the decade positions them as prey to an unknown enemy. They discover truth is something more than words inked in black on white, and love is both an opportunity and a risk.

What’s that? You’d like to know how to get a copy? Pre-order here. 😉