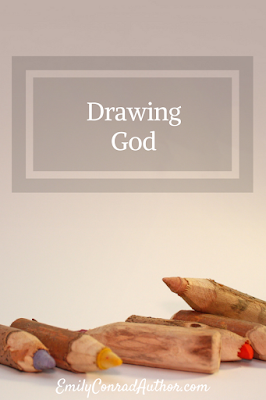 According to one drawing I saw recently, God is a Moses-like figure with a halo, looming with his hands stretched out over the planet.

The illustration was in a drawing app I’ve been playing since I downloaded it while waiting for Dad’s surgery. (He’s doing well, by the way. No signs that the cancer spread.) The app showed me the picture and my job was to label it. I knew what word it wanted immediately.

When I first saw the drawing, I thought the artist had given the drawing a smile. I saw it again later and realized it wasn’t so much a smile as a neutral mouth, but still, the idea of God smiling struck me.

This isn’t the first time I’ve thought about whether or not God is happy, smiling. Here’s a snatch of a conversation from the manuscript I finished a couple of weeks ago:
Another smile flicked, Gannon’s gaze on their hands, before his expression sobered again. “I don’t think our hearts can be right on their own, but we can follow David’s example and ask God to create clean hearts in us. He can do for us what we could never do for ourselves.”
“That seems like a lot to ask.”
“It’s the only way. And He’s happy to do it.”
Madeline nodded, though she hadn’t thought of God as happy in ages and still couldn’t picture it.

Seeing that drawing of God in the game prompted me to wonder how I think of Him. How would I draw Him? With a smile? As Jesus on Earth or distantly looming over the planet? 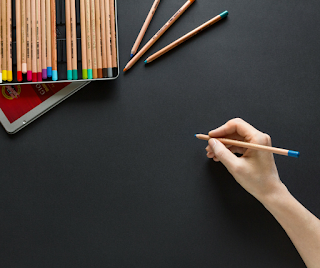 The passage in Ezekiel 1 comes to mind, and I’d probably end up with something meant to portray God on his throne, his face a yellow oval meant to convey intense light.

Neither is complete. Neither is more than a shadow of an idea. One emphasizes the holiness, the otherness of God, perhaps the unapproachable light. The other hints at His involvement in our lives. But Jesus and the Bible show us that God is both these and more.

I started reading the book Desiring God by John Piper a while back. Honestly, I’m not sure if I finished it or not, but I stuck with it long enough to get the point that God is happy, in part based on verses like Psalm 115:3 and 135:6.

I was also recently struck by another verse in Psalms that proclaimed the Lord takes pleasure in those who fear him (Psalm 147:11).

The LORD taketh pleasure in them that fear him, in those that hope in his mercy. (KJV)

Not only is God smiling, His smile is directed at someone.

My hesitation to type that reveals I struggle with the same kinds of fears as my character Madeline. Do I really qualify as someone who fears him? Is my faith and my obedience good enough?

The verse itself quells these fears. All I must do is hope in His mercy. He is faithful to complete the good work in me that He Himself started.

Because of Jesus, God smiles at me. He’s happy to do for me what I cannot do for myself, happy to save me from my sin-blackened heart, happy to create something new in me that pleases Him.

Is God still on His throne? Is He still the Great Judge? Of course He is.

But that’s not a complete picture of who He is.

Neither is that cartoon-like figure in that drawing. 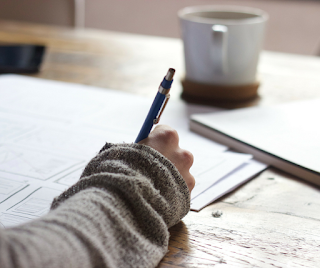 Even if we spend all of our days studying and growing closer to God, we won’t get the complete picture in this lifetime. Any drawing blog post or book or song will fall short when it sets out to describe the indescribable.

Now that’s something to be thankful for.

As followers of #Jesus, we’re free to picture God smiling in our direction. #faith via @emilyrconrad