Confessions from a First Impressions Winner

I didn’t post much about winning the contemporary category of First Impressions (okay, other than that duck video…) not because I’m not happy and proud and honored (I’m all of those things!), but because there’s a lot for me to process in the win. 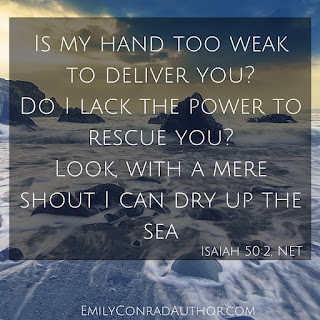 As of late, I’ve felt weak, tired, and doubt-ridden. I’ve set goals for myself regarding how many words I’ll write Monday-Friday and a date when I intend to finish the manuscript I’m pounding out. Though I’ve kept up, I’ve found myself counting down to the weekend when I won’t have to struggle through all the work. I’ve felt spiritually and emotionally dry, too. The weather hasn’t helped by insisting on clouds and rain for as long as it has.

I prayed about the doubts and the fatigue but only half-heartedly brought to God the contest I knew would be decided on 12/15.

One of my fellow finalists told me she was praying that the one who needed the win the most would receive it. That mindset is a beautiful reflection of faith and love that made me stop and think. First, why wasn’t I praying like that? Second, someone needed the win. Yes, Lord, give it to her.

Then, I came across a post titled Zechariah A Model of Faith and Unbelief. Could the two go together? Because wow, that sounded like some of what I’d been struggling with! So I clicked over. The blog talked about how Zechariah was righteous but stumbled over doubt when the angel came to tell him his prayers were being answered and he would have a son. The post ended by asking if I’d be surprised if God answered my prayers. 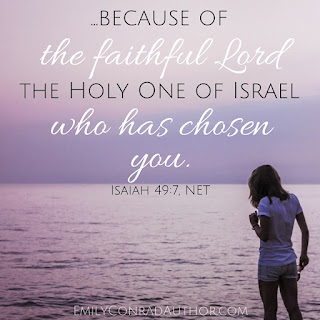 That question haunted me. I’ve prayed for some things lately (and no, I’m not talking about winning a contest), and I realized that yes, I would be surprised to have my requests granted. I’m just going to be transparent here and confess that the underlying doubt was rooted in a fear that maybe I just don’t have that kind of relationship with God. Maybe I’m not dear enough to Him for Him to answer my prayers.

On the morning of 12/15, looking again to be lifted from the slump I’ve been in, I ended up in Isaiah. Though verse after verse met me right where I was at, I’ll pick just one passage for this post today. (Plus the ones in pictures, of course!)

But I thought, “I have worked in vain;

I have expended my energy for absolutely nothing.”
But the Lord will vindicate me;
my God will reward me.
So now the Lord says,
the one who formed me from birth to be his servant –
he did this to restore Jacob to himself,
so that Israel might be gathered to him;
and I will be honored in the Lord’s sight,
for my God is my source of strength –
he says, “Is it too insignificant a task for you to be my servant,
to reestablish the tribes of Jacob,
and restore the remnant of Israel?
I will make you a light to the nations,
so you can bring my deliverance to the remote regions of the earth.”
Isaiah 49:4-6, NET

By bringing me to passages like that, God was answering my cries for help. He was showing me that despite my doubt and discouragement, He is strong. Other passages reminded me that He is the God who parted the sea. He is still that God. And that God has great plans for me and will use me and my writing. He does care about me as an individual and as one of His followers. 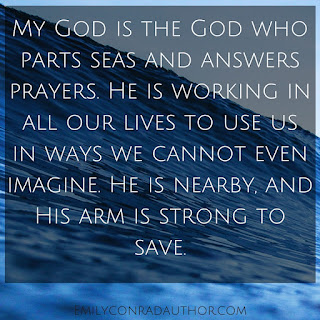 A few hours later, I got the email saying I had won. It’s humbling to confess that I can see how I could be the “her” who needed the encouragement, but I’m happy to say that God began encouraging me long before I got news of the contest.

Now, I’m praying that God will also encourage the other writers who participated in First Impressions, because I know they need it, too.

That’s why I’m sharing my story today about how God met me in my discouragement through His people and through His Word.

Regardless of whatever contests we win or lose, God is good. He is the God who parts seas and answers prayers. He is working in all our lives to use us in ways we cannot even imagine. He is nearby, and His arm is strong to save.

Don’t be surprised when He does.