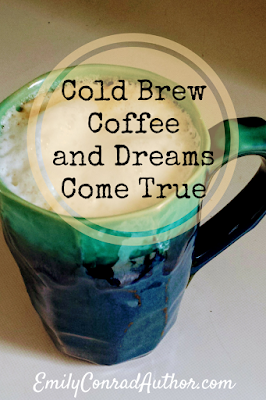 I’ve enjoyed coffee long enough that I should know by now how much each little tweak to the brewing process matters.

I appreciate my Ninja coffee maker and it’s “specialty brew” capabilities, but I love the depth of flavor I get from my Aeropress (affiliate links). I know that adding a scoop more or less of coffee makes a big difference. I know that if I get a caramel macchiato made at one particular coffee shop, it’ll be better than if I get it at the closer place. I know fresh roasted coffee is better than the stuff that’s been sitting on the shelf at the grocery store.

Each little variation makes a difference.

Yet, when I saw a recipe for cold brew coffee, I dismissed it.

That sounds like a lot of hassle. You have to let it steep how long? I’ve got more than enough waiting in my writing life. I’d rather not carry that over into my coffee drinking.
I’ll just use my coffee maker to make an “over ice brew” and that will amount to the same thing.

So I used the “over ice brew” in a recipe for a Turkish coffee float from Eating Well magazine. 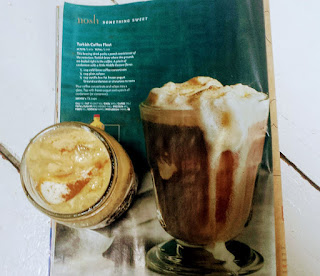 The results had hints of grandeur–they looked picture-perfect. Vanilla fro yo, one of the three ingredients, covers many wrongs, but still, the taste was sour and bitter. Baking soda tempered the negative but still the coffee float was nothing as special as I’d hoped. I abandoned it.

This week, walking through Aldi, I stumbled across a bottle of cold brew concentrate. Just what the recipe called for. At over seven dollars for the rather small bottle, the price made me hesitate, but I decided I would try it once. I would indulge. I would follow the recipe. And then I would know for sure if there was any hope for it. Maybe by some chance, it would turn out.

Though there wasn’t a hint of chocolate in the recipe, as the fro yo melted into the foamy coffee, a sweet dark fudgy flavor came through. The drink was so delicious I was actually thinking it about before I got out of bed the next morning, wondering if I should switch up my usual morning latte for a float.

(I’m a creature of habit and fro yo didn’t seem like a morning thing, so I saved the float for the afternoon. But still.) 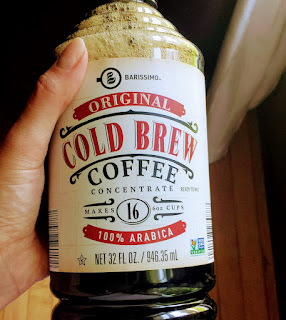 I went back online and looked up a recipe for making my own cold brew concentrate. With fresh perspective, the recipe no longer seemed troublesome. So I have to let it sit on the counter six to twelve hours. So I have to find a way to strain it. The results are totally worthwhile. When the little bottle from Aldi runs out, I’ll be making my own.

But this morning, before I got out of bed, my most important thought wasn’t about whether or not the make a coffee float for breakfast (though, confession, yes, I did think of it again…). My most compelling thought was that my writing life is the equivalent of cold brew.

I would love to take shortcuts. I see the publication process go so quickly for some authors. Some of my friends who started writing after me have multiple books published. Why not try and copy their path and see my own novels in print sooner?

I am grateful for the parts of my writing dream that have seen success. Please don’t get that wrong. But in some areas, it feels as though God has ground up my hopes, plunked them in a glass of water, gave them a good stir, and is now letting them sit.

Maybe some of your dreams are sitting in the jar next to mine. Maybe you, like me, are asking God if you couldn’t just move on to the next step already.

I’m pretty sure this isn’t helping. Do we even need this ingredient? Can’t we replace it with something else? This other process worked for my friends. Look at what they have, how sweet and satisfying their lives are.

But just like there’s a difference between a latte and a Turkish coffee float, there’s a difference between my writing life and my friends’. It’s not that one is better than the other. It’s just different, and if I rush the process or try to substitute ingredients God says I need, the results might look good in some ways, but they will taste sour and bitter. No amount of baking soda will turn them into the delicious treat God intended me to have.

I don’t understand the process. Not completely. I can’t see the recipe from here, but I’ve glimpsed some of the ingredients as God stirred them in. There’s good stuff like laughter and success and progress there, but there’s also waiting and rejection and disappointment. I can’t say how that will add up to just the result God wants.

What I do know is each step of the process makes a difference. The ingredients cannot be replaced by something quick. The results are worthwhile. The shortcuts don’t turn out.

God knows what He’s doing, and the only way to success is to follow His recipe.

Bring on the cold brew. The results are going to be oh-so worthwhile.