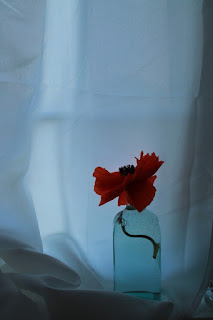 Despite poppies’ tainted reputation, I was thrilled to discover some kind of hybrid poppy growing in my yard. But because of that reputation, I didn’t try to bring any in the house until my dogs broke one off. Unsure of if people even cut poppies, I took it into the house, plopped it in a vase, and subjected it to a photoshoot.

The next day, it dropped its petals and a mess of black pollen on my desk.

The short shelf life inspired me to do my research. I learned that singeing the bottom of the stems of cut poppies helps them last longer. Intrigued, I gave it a shot, filled a vase, and set out to write a poem about this new obsession of mine.

Cue even more research. What kind of flowers are poppies? Bad because of opiates? Or good, because isn’t there a poem written by a soldier about them? Or are they just another pretty face in the garden?

All of the above. Some poppies are used to make drugs. Some are used to symbolize those who gave their lives in battle. Some are cut purely for their looks. But, in my mind, poppies as a symbol of remembrance overshadows both the negative and the pretty.

Though I’m tempted to give you a history lesson about poppies, I won’t. Suffice to say, poppies grew around the graves of WWI soldiers, inspiring poetry. The poetry inspired a movement: selling poppies in memory of the fallen and to support our veterans. (If you are interested, you can read about Memorial Day and poppies and the related poetry here and here.) 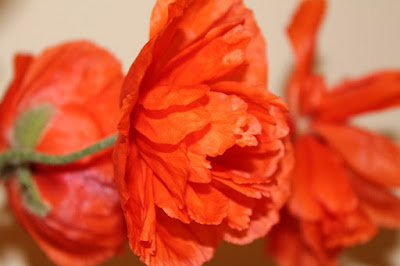 The task of truly honoring the fallen daunts me. I, in my comfortable life, can’t fathom what it would be like to witness war let alone fight in it. Let alone die in it. For their willingness to face battle and risk their lives, I applaud and respect our service men and women. Thank you, thank you, thank you.

I can’t say it enough.

But I can cut a flower. I can put it on my desk and watch its short lifespan with gratitude. I’m thankful not only for this flower and the God who made it, but for the good it stands for, for the men and women who have given more than I can comprehend. Thank you, thank you, thank you. 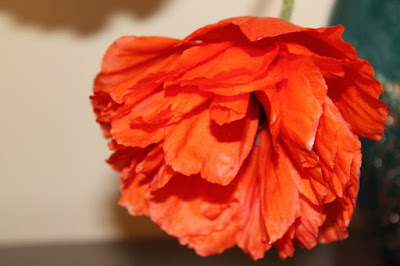 Poppy 101
Torch the cut edges of poppies
to make them last in a vase of water.
Watch the little white hairs
on the green stems shrivel like arm hair,
white, then black, then white again
as they curl in the flame.
On your desk, their wet-paint scent refuses to pay
the compliments roses and lilies effuse.
This flower doesn’t reserve any beauty
for stop and smell, lavishing it instead
on stamens like underwater anemone,
on a stigmatic disk like an eggplant sea dollar.
Black pollen powders the petals,
metallic shavings on crinkled clown hair
petals atop a stem bowing
this way and that, undecided
because the sun keeps moving
like soldiers burying friends in fields
stirring up long dormant seeds
to grow between white crosses.
Harvested, the orange embers glow,
strong at first, then fading
to heaps of orange and black,
a reminder of the messiness of life,
of the inherent beauty of
brevity and ferocity and sacrifice,
of strength we gain only in fire.