A Tale of Many Jade Plants

by [email protected] | Dec 14, 2017 | A tale of many jade plants, notes on the importance of maintenance, staying faithful | 1 comment 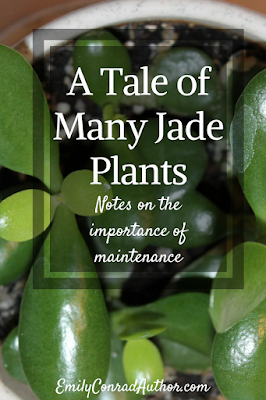 I have a really large jade plant. My in-laws, gardeners extraordinaire, gave it to us last year, and I gave it a home on our heated front porch, where it could soak up sunshine year-round.

And for a year, the plant didn’t seem to need much more than that sunshine. It’s a succulent, after all.

The jade does, however, have a habit of dropping leaves. After about a year, I noticed some rather sparse-looking branches. Looking closer, I saw that some sections of branches had shriveled and dried up, breaking though some of the leaves on the end were still alive.

The thing was shrinking faster than it was growing, and I wondered how—if my plant was healthy—other people ever grew those jade plants I saw for sale at the farmer’s market or in stores.

I started watering it a little more often—but not too much, because the plant had survived a year with only a handful of waterings, and I’ve killed plants before by overacting when I change their care routines.

I took a few of those orphaned sections of jade and planted them in smaller pots. Because they had no roots, I watered them frequently. 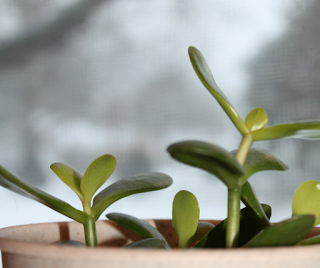 The little buggers flourished. Bright green new leaves appeared, not just one or two at a time, but in clusters.

Lesson learned, I started watering the larger plant once a week, and wouldn’t you know, that flourished, too.

A branch that had become bare during the drought is now home to a new collection of little promising little petals. Other light green growth has appeared on many, many of the branches. A few of the broken-off sections which I stuck in the dirt of the main plant have taken root and shot up.

Here’s 65-pound Luther next to the main plant. 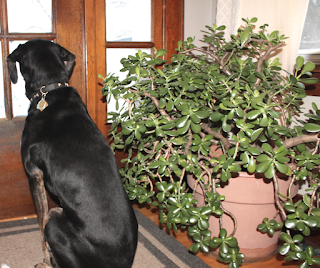 With care, I went from having one jade plant to having many.

Sometimes my marriage and my relationship with Jesus seem a lot like that jade plant.

They don’t need much special care. Left on auto-pilot, they take care of themselves. Or at least, that’s how it seems until I let it go too long and then take a close look.

Ongoing is vital, preferably before things start to come apart, but definitely when we notice a disconnect.

In my marriage, care is the water of communication, the food of time and prayer. My spiritual life depends on much of the same.

Watered and fed, our relationships grow. But when they’re growing, the effort starts to seem less vital. By treating something strong and resilient as if it’s indestructible, we weaken it little by little. As we miss more and more maintenance, damage sets in.

It may not be apparent at first, but dry seasons take their toll. When life jostles what we have not maintained, it knocks loose what’s barely hanging on. Maybe a whole branch doesn’t fall off, but all those petals add up. Or maybe a branch does hit the ground once in a while.

Thankfully, our God is the Way, the Truth, and the Life. When I let things shrivel, He calls me back to the old care routines. He uses them to breathe new life into what was dying back, and often that life returns much more quickly than watering coaxes new leaves from a jade plant. 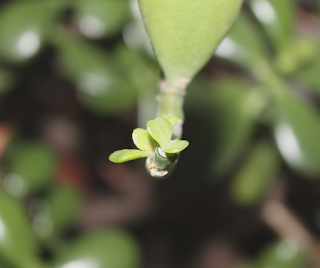 Not that a fast recovery is guaranteed in every situation. Still, God calls us to be faithful and to draw close to Him, our hope. He’s the Life-Giver, Healer, and Redeemer.

For Him and Him alone, nothing is too far gone.

With Him and Him alone, though other things may die, our souls can claim the promise of eternal life.

Without new growth, relationships like #marriage and #faith and friendships die back like plants do. via @emilyrconrad