A Glimpse Behind the Scenes of Justice

by [email protected] | Mar 1, 2018 | A Glimpse Behind the Scenes of Justice, Emily Conrad, Justice novel, The Writing Life | 11 comments 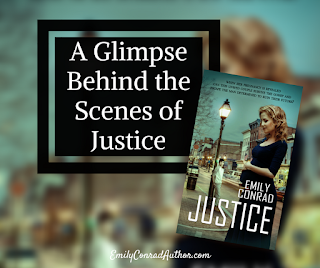 Justice‘s e-release is now just one week and one day away! AND, today is March 1st, which is also the first day in the story!

Jake thought he was meant to marry Brooklyn, but now she’s pregnant, and he had nothing to do with it. Brooklyn can’t bring herself to name the father as she wrestles with questions about what her pregnancy means and how it will affect her relationship with Jake. If Harold Keen, the man who owns the bookstore across from Jake’s coffee shop, has anything to do with it, the baby will ruin them both. 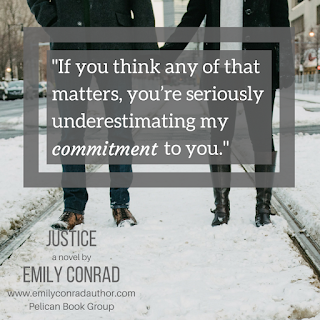 Ready for a glimpse behind the scenes? 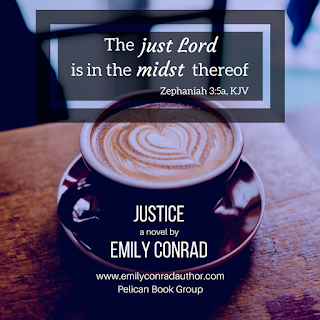 2. Justice spans about 8 months, so there’s at least a glimpse of each season in Wisconsin, starting with an unexpected March 1st snowfall! There is a possibility of snow today, but our high is 41, so it probably won’t stick around if we do get any.

3. Though there are also key differences between the circumstances in Justice and what Mary and Joseph faced, there are also some similarities, and the novel is full of nods to the Biblical couple. The coffee shop is named Hillside because Nazareth is on a hill (see Luke 4:29). And Jake’s troublesome business competitor’s name, Harold Keen, is also no coincidence.

4. Justice has had three other titles: Forget the Night, Another Man’s Son, and Justice Lost, which was finally shortened to the final title of Justice.

5. I started the first draft of Justice about 17 years ago. The first version of the story did not include a pregnancy. 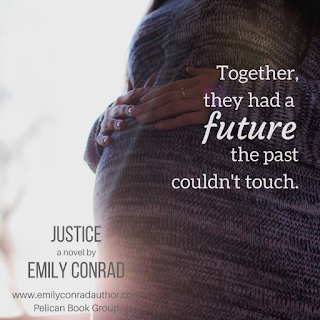 6. The story was influenced by my study of Job, Mary and Joseph, and the Sermon on the Mount.

7. To write the novel, I strayed from the advice to “write what you know,” so I researched rape survivor experiences, where hotels are likely to have security cameras, and pregnancy. I lurked in a forum about starting a coffee roasting business. I also questioned my parents and brother on flipping real estate (a secondary character’s job).

8. But, some elements of the story are based on my experiences. I based North Adams on my hometown. I am a youth leader, and so is Jake. I am a perfectionist, and so is Brooklyn. Oh, and I did learn to knit from a friend at church, similar to the way Brooklyn learns to crochet from ladies at her church. 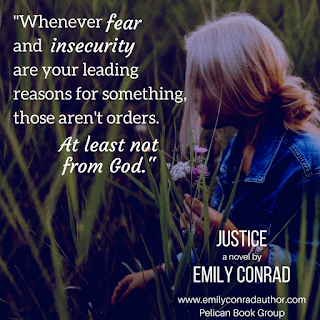 9. None of the characters in the book have pets. As a dog lover, I’m still not sure how that happened.

I hope you enjoyed this glimpse at the stories behind the story! 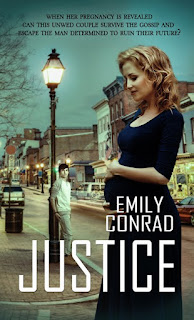 If you prefer paperback (and I hear you–I’m waiting for it, too!) and want to order now, while you’re thinking about it, you can pre-order a paperback of Justice through my publisher’s website here.

Over the next few weeks, the blog will be a little different because of the blog tour for the book launch. Instead of posting new material here, I’ll be posting links to places around the web where there’s talk about Justice. I hope you’ll find the interviews (even one done by video!), giveaways, guest posts, and reviews to be a lot of fun. As the tour winds down toward the end of the month, I’ll pick up normal posts here again.

Thank you all for your support and the way you’ve celebrated with me as this milestone draws closer and closer! You’re all such a blessing to me.

Going back to #1 and the candles Brooklyn burns (always variations on vanilla and caramel), what candle scent is your favorite?

A glimpse behind the scenes of @emilyrconrad’s #writing process and her debut #christianfiction Justice!