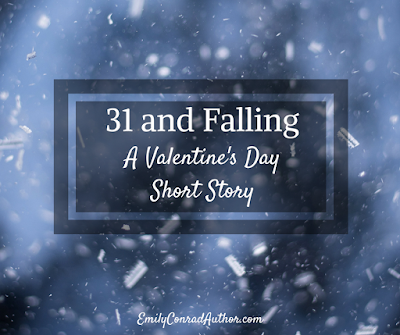 Did you know I offer some free short stories on my website? Valentine’s Day is coming up, and that’s reminded me of “31 and Falling,” the short story I published last February in conjunction with a series on God’s love.

Here’s an excerpt. You can read the full story (and others!) on emilyconradauthor.com. 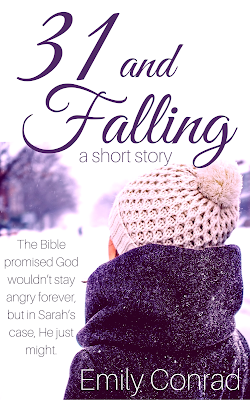 “Does he get his talent from you?”

Sarah blinked up at Coach Luke. At six-two, maybe six-three, he towered over the lowest bleacher, which she shared with her son. “I’ve never played hockey.”

“But do you skate? He’s a natural out there. Sometimes it runs in the family.” Luke’s smile was easy, probably disarming for most women, even if they’d managed to keep their defenses up when his warm brown eyes first landed on them.

If only Sarah could shield herself with the gear Peter was shedding. Why had Coach Luke picked today, when she was still raw over losing the promotion, to talk to her? “No, never.”

“She skated in the parking lot, though.” The last of his hockey pads in the duffle bag, Peter hopped up and swung his arms in dramatic circles, lifted one leg to waist-height, then plopped back onto the bench, laughing.

Luke flinched as if the idea of watching her fall pained him. “Is that true? You fell?”

She jammed her hand in her pockets. The rink must be in the fifties, but the short drive from home to the gym hadn’t warmed the car, so she’d been freezing on the way over. She wouldn’t thaw out until she was back home, under a blanket with a cup of tea. Or maybe not until July. “I did.”

“Are you all right?”

“Nothing broken.” Her lower back still ached from the collision with the ice and asphalt. As for her pride, only Peter had seen the fall, and he could reenact it as much as he liked if the show gave Luke the impression she was a clumsy, awkward type he’d be better off leaving alone.

“I could walk you to your car and save you from a repeat.” His eyes were lit with something. Hope?

She’d be better off falling in the parking lot than falling for a man. She would explain her hands were full as a single mother and she didn’t want to complicate her life, but Peter sat next to her, old enough to start recognizing if she used him as an excuse. “I’m sure we’ll manage.”

Beyond Luke, Kelsey, opened her mouth, miming a silent scream of excitement. She had been encouraging Sarah to break the ice with Luke since hockey started. Hoping to stop her before Luke might turn to notice, Sarah shook her head.

Luke shouldn’t be interested in her. The ice arena was part of a full sports complex. Just outside the ice arena, there was a warming area with a clear view of the cardio machines and weight room. A guy with good genes like Luke, who clearly used the free staff access to the rest of the gym, had his pick of the place. Any of the fit women with annoying, perky ponytails would bask in his attention. The only reason he’d go for Sarah instead would be if he expected her to be a desperate single mother. Easy.

He had another thing coming.

~
You can download the full story here.
If non-fiction and blog posts are more your style, here is a link to the posts of the Indivisible series! 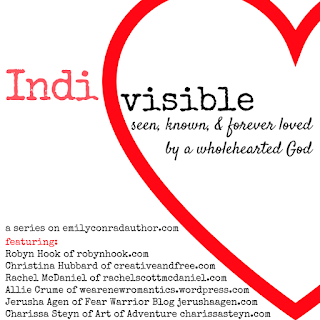